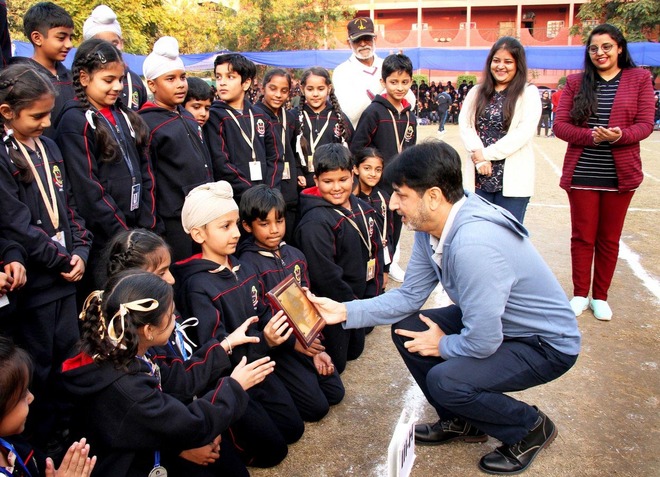 City schools started observing ‘Fit India school week’ on Monday. The school have been asked by the Central Board of Secondary Education (CBSE) has asked schools to observe the week.

Schools may upload material on their website related to the movement. They may also register themselves with the ‘Fit India’ portal. The CBSE will also provide digital certificates to the schools taking part in the movement.

DAV Public School inaugurated the week with a yoga performance by students of junior classes. Students were taught a few yoga exercises which can be performed on a daily basis. The week will be observed from November 25 to 30. During the week, students will be guided to live a healthy life and informed about the importance of physical exercise and activity such as sports for a fit body.

Dr Neera Sharma, principal of the school, advised students to stay away from junk food and eat home-cooked healthy food. She urged them to participate in sports of their choice to remain healthy. She suggested that performing yoga in the morning daily could help fight diseases.

Besides the involvement of parents, grandparents and students, the event also witnessed participation by teachers and ancillaries, including the school van drivers. Giving details, Rajiv Kumar Sharma, principal of Spring Dale Senior School, said the ancillaries were included in the event according to the directives issued by the government for the ‘Fit India campaign’ and a CBSE circular sent to schools.

He said a spinning top was included in the event as it was one of the traditional games of Andhra Pradesh, the partner state of Punjab, in the ‘Ek Bharat Shreshtha Bharat Movement’ launched by the Prime Minister. “The activity was assigned to the ancillaries, who had a great fun spinning their tops even as the audience enjoyed watching them participate in this competition,” Sharma said.

Later, teachers competed in various competitions such as tug of war, balancing the ball and straight race.