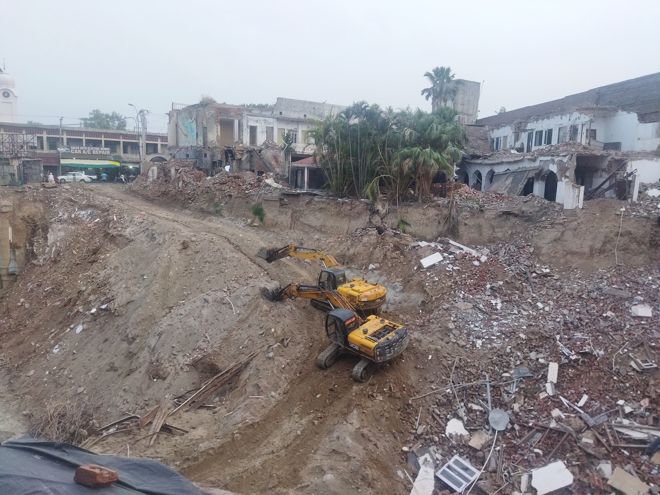 The site where basement of an under-construction hotel on the Railway road caved in. Photo: Sunil kumar

Deputy Commissioner-cum-Municipal Corporation Commissioner Harpreet Singh Sudan suspended five Municipal Town Planning (MTP) wing officials for negligence during the construction of a hotel on the link road in front of the railway station and for endangering the life of the public.

Sudan has taken this action on the basis of the inquiry report of SDM-2 Harpreet Singh. A copy of the orders has been sent to the Director, Local Government, Punjab, for intimation and to take action against officials currently serving outside the district.

After the collapse of a major portion of the Grand Hotel and other buildings around the under-construction hotel on the railway link road on May 12, a probe panel was constituted by the DC, Amritsar.

A detailed inquiry has been conducted by Harpreet Singh, Sub-Divisional Magistrate, Amritsar-2, in which prima facie gross negligence, connivance and dereliction of duty have been found on the part of the MTPs and ATPs. They failed to take action against the owner of under-construction Riche Hotel despite flagrant violations related to building bylaws, which contributed to the collapse of the adjoining building of Grand Hotel and further causing severe damage to adjoining houses leading to danger to life and properties of inhabitants, the report said.

The Deputy Commissioner has also issued a notice to the owner of the under-construction hotel and asked him to submit his reply within 10 days.

After the suspension of the officers of the MTP department, Joint Commissioner of the Municipal Corporation Hardeep Singh entrusted the work of Municipal Town Planner to Rajneesh Wadhwa along with Paramjit Dutta. Kulwant Singh will take charge as Assistant Town Planner.