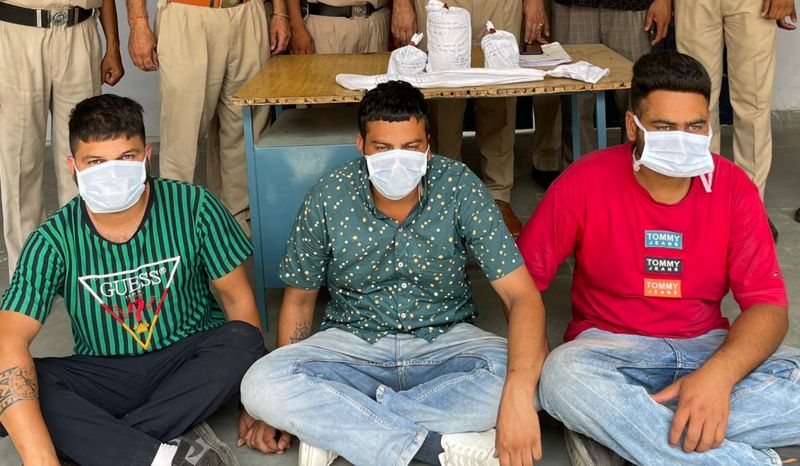 The district police on Sunday busted a six-member gang of robbers from Chohla Sahib here by arresting three of its members.

The district police on Sunday busted a six-member gang of robbers from Chohla Sahib here by arresting three of its members. Three other members managed to escape from the spot.

One rifle and a country-made pistol with 15 cartridges were recovered and the car of the gang members too had been impounded.

The police had arrested three more accused with illegal weapons from different places on Sunday.

SSP Ranjit Singh Dhillon said Chohla Sahib police had arrested three members of a robbers’ gang, who were identified as Gurjit Singh of Jauneke, Harpreet Singh of Rattoke and Gurpreet Singh Gopi of Sito Nau-Abad. One country-made pistol and a rifle with 15 live cartridges had been recovered from the accused.

Their three associates who absconded were identified as Pal Singh of Sandhra, Sandeep Singh of Talwandi Sobha Singh and Jobanpreet Singh of Jauneke.

The SSP said the robbers were involved in a number of incidents of robbery, looting, snatching, land grabbing, etc. He said the police were conducting raids on the possible hideouts of the absconding robbers. The SSP said a number of robbery incidents would be resolved during the interrogation of the gang members. Chohla Sahib police had registered a case under Sections 25 (6), (7), (8), 54 and 59 of the Arms Act.

In the second incident, Kacha Pakka police arrested Satnam Singh Sattu, a resident of Machhike with a country-made pistol and 15 grams of heroin. His accomplice was identified as Mahanvir Singh of the same village, who managed to escape on a motorcycle. The accused had been booked under relevant sections of the NDPS and the Arms Act.

In the third incident, Harike police said Sukhwinder Singh, alias Kaka, a resident of Harike, was arrested by Harike police with a country-made pistol. He was on a car which had been taken into custody by the police. A case under relevant sections had been registered.

Kalga Singh, a resident of Masatgarh, had been arrested by Patti (city) police with a country-made pistol and one cartridge.