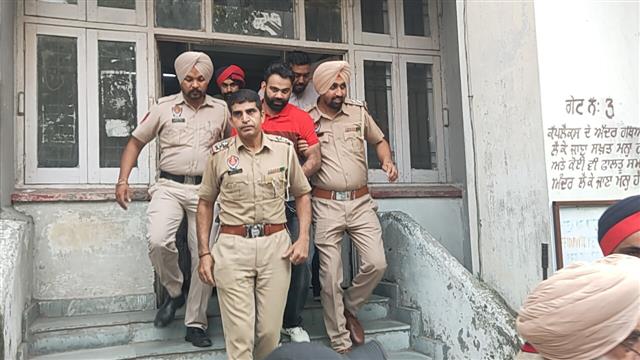 Gangster Jaggu Bhagwanpuria after being presented in a court.

Notorious gangster Jaggu Bhagwanpuria was brought on a five-day production warrant by the district police in connection with a three-year-old case here on Wednesday.

One .315 bore pistol and four cartridges were recovered from Baljit Singh Buli of Jandiala Guru on November, 2019 by the Sadar police. Tarn Taran SSP Ranjit Singh Dhillon had confirmed the development and said that a case in this regard had been registered (under FIR 401) in 2019 at the Sadar police in Tarn Taran.

Jaggu was brought under tight security cover with as many as 10 vehicles. The SSP said Jaggu was brought from the Amritsar Central Jail for interrogation in the case of seizure of illegal weapon.

Baljit Singh had revealed that he had taken the weapon from Jaggu Bhagwanpuria. The district police had provided tight security around the local CIA staff complex where Jaggu had been lodged.