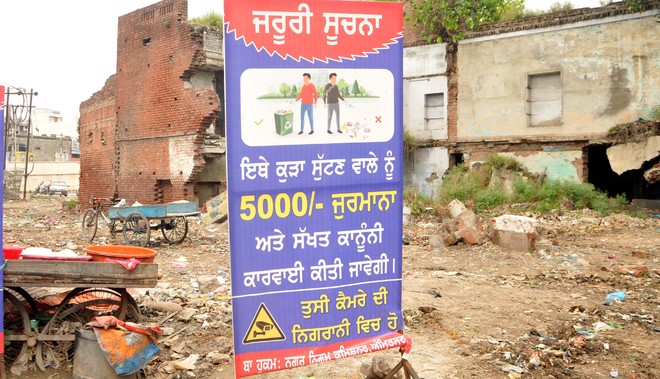 The civic body has installed a display board announcing ~5,000 as fine and imprisonment for violators. Tribune photo

Despite precautionary measures, people continue to dump garbage at the prime land of abandoned old Sabji Mandi, situated outside the Hall Gate.

The Municipal Corporation installed display boards announcing Rs 5,000 fine and imprisonment for violators dumping the refuse. It also announced that the area was under the CCTV camera footage.

These measures were introduced after the fire had broken out on July 4. However, it has limited impact on residents who continue to flout norms. Some mischievous persons had even damaged the CCTV camera.

Among other things in the refuse, Parali (straw) used as cushion in fruit baskets and broken wooden boxes constitute a lethal mix being combustible material.

Unscrupulous people even burn refuse to dispose these off as no vehicle comes to lift it.