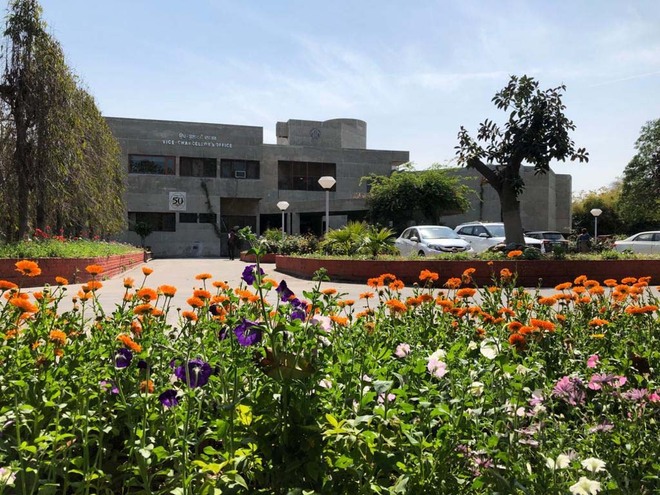 A view of GNDU campus in Amritsar photo. The Tribune.

The Guru Nanak Dev University Teachers’ Association (GNDUTA) has asked the Governor Punjab, who is also the chancellor of GNDU, to issue strict instructions to Vice-Chancellor Jaspal Singh Sandhu to work as per the statute and calendar of the university and his office must diary the communications from the GNDUTA.

Lakhwinder Singh, president of the GNDUTA, claimed that the VC had instructed his office staff that they should not accept and diary any letter or communication from the GNDUTA. “Along with GNDUTA secretary NPS Saini, I visited the VC office on May 10 to submit a representation highlighting various issues related to investment of the university funds but the staff refused to diary the same expressing their helplessness because of the strict instructions from the Vice- Chancellor. We visited his office again on May 11 to submit another representation regarding imposing the change of examination pattern from subjective type to multiple choice objective type examination without the required prior approvals from various constituted bodies as per rules, but this too met the same fate,” Lakhwinder said.

He said, “Since then, the GNDUTA is communicating only through emails with the Vice- Chancellor’s office, about which the apprehension is that he may deny the receipt of any such communication”.

The leaders pointed out that the Establishment Branch vide no Endst. No. 305l-3145/EStt. /A-10 dated February 22, mentioned that the Vice-Chancellor had been authorised by the Syndicate in its meeting held on September 21 to assign additional responsibilities to teachers in various administrative offices of the university. Following this, many teachers have been given additional responsibilities. They claimed that despite repeated communications seeking a copy of the proceedings of the Syndicate meeting authorising the VC had not been made them available.

On the reason of VC’s attitude, Lakhwinder and Saini maintained that the VC resorted to stifle the voice of the GNDUTA as it was in the process of making serious revelations regarding gross misgovernance in the university.

Despite repeated attempts and text message VC Jaspal Singh Sandhu did not respond.