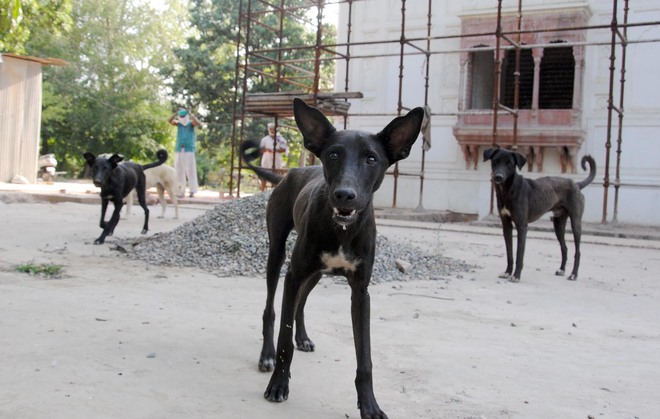 People in rural areas, especially those having their houses in the fields, are in constant fear of stray dogs. Photo: Sunil kumar

Repeated incidents of mauling of children by stray dogs have failed to wake up the local government from its deep slumber and find a solution to the stray dog menace in rural areas.

On Saturday, a 2-year-old boy was mauled to death by stray dogs at Varpal village here. Similar incidents were also reported in the past.

Angandbir Singh of Hardkhurd village in Ajnala was killed by stray dogs in January 2018. A similar incident was reported in Khanna in which a 4-year-old boy, Viraj Kumar, was mauled to death by a pack of stray dogs at Bahomajra village in January this year.

Jasbir Singh, an employee of the Revenue Department, said these were those incidents which were highlighted in media after stray dogs killed humans. People in rural areas, especially those having their houses in the fields, are in constant fear of stray dogs. Several instances have occurred in which stray dogs killed calves and milch animals, including goats.

Rattan Singh Randhawa, a farmer leader, said it was the prime duty of the governments to find a solution and arrange funds for dog sterilisation. Even village panchayats, municipal councils or committees paid no heed to the problem.

A retired official of the Animal Husbandry Department said the only way to control the menace was birth control of canines by way sterilization. However, the Local Bodies Department does not have the funds for the purpose while in villages it is the duty of the Panchayati Raj Department.

Additional Deputy Commissioner Himanshu Agarwal said as far as the death of Gursanjhdeep was concerned, officials were asked to probe the matter. Initially, it was found that stray dogs were from Haddorodi (where animal carcasses are dumped and skinned).

The local Municipal authorities were to start a dog sterilization a project but due to the Covid-induced lockdown it got delayed. “Once the MC authorities complete the project in the city, we would look into the menace in rural areas also,” added Himanshu Agarwal.