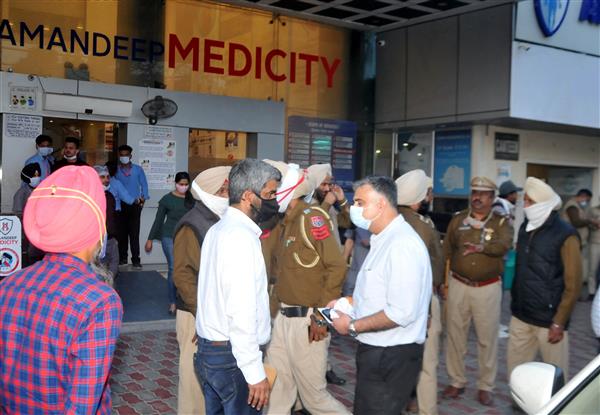 GST officials and cops outside the private hospital, where businessman Rajan Arora, whose house was raided, was brought for treatment after he complained of uneasiness.

A local businessman was hospitalised amid an ongoing raid related to tax evasion at his house on Lawrence Road on Thursday.

The businessman identified as Rajan Arora was discharged by the private hospital after they found him fit to go. An official of the raiding team said it was a matter related to tax evasion amounting to over Rs36 lakh. He said a team of officials from Chandigarh, Ludhiana and local team raided the house and seized some documents.

The officials said Rajan was taken to a hospital for medical examination after he had complained of chest pain and uneasiness.

After Rajan was discharged from the hospital, the team took him along to an undisclosed location. The officials, however, said revelations regarding the case would be made after the investigation gets complete.

Earlier, high drama prevailed outside the private hospital, where Arora was brought, as it was rumoured that the team had raided the hospital. They said private hospital owners are also facing charges for an insurance-related fraud.