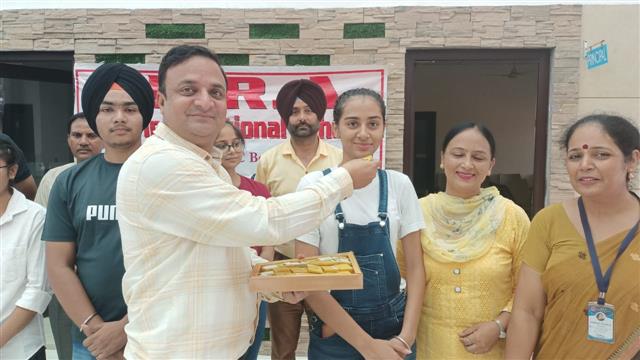 HRA International School is perhaps the only educational institution in the entire district which prefers to rest its laurels on the academic performances of its students. All others are into the mad rat race of getting publicity in newspapers. Reason enough why when the Class XII ISC results were out, the school did not create a hype and hoopla over one of its students, Navkiran Chauhan, attaining first position in the district. The girl made Gurdaspur proud by securing 98.5 per cent marks. In fact, there were 11 students who scored more than 90 per cent, but Navkiran was the toast of the town. She aspires to be an IAS officer because “in that way she can serve her motherland”. Her performance carries all the more significance because she did not take tuitions, while all others who got less marks than her, did so. School Principal Suman Shukla believes that good education is the passport to the future, for tomorrow belongs to those people who prepare for it today. She said, “Unlike other schools, we at the HRA believe that the purpose of good education is not to fill a student’s mind with facts, rather it is to teach them to think. I often tell my pupils that education is the only thing which nobody can take away from you. Actually, in my opinion, teachers can only open the doors. A student has to enter himself. As a teacher your role in life goes beyond providing decent education. You have to assume the role of a leader, coach, guide and above all facilitator of growth.” Shukla adds, “For students who perform below par or below my expectation, I often tell them to work hard. There is always a next time.” The story of Sri Lankan cricketer Marvan Atapattu assumes significance here. The man scored five ducks in the first three Tests of his career. His world had come crumbling down. So much so, the selectors were not even willing to hear his name. However, he never let that under-par performance act as a blot on his career. He worked hard and with the utmost of dedication. Finally, he became only the second Sri Lankan cricketer to play 17 years of International cricket on a trot. He went on to score 5,504 runs in 90 tests. The moral of the story is always back your conviction. Things will start happening automatically for you. As for HRA coaching Navkiran, there is a saying that aptly suits her: “You educate a man; you educate a man. You educate a woman; you educate a generation.”

Principal of Government Senior Secondary School, Ghot Pokhar, Balwinder Kaur is a much harried woman. If she turns her mobile off, she stands to lose important calls. If she turns her phone on, she is flooded with unnecessary calls. Her problem is that when she was the Principal of Meritorious School, Gurdaspur, her number was put on the website. She left in July 2019, but the website still carries her number. She claims she has discussed the issue on numerous occasions with Maninder Singh Sarkaria, Director, State Council of Education, Research and Training (SCERT). However, she is yet to get the much needed relief. Her phone rings at least 20 times a day. Parents and students keep her busy with their queries. She laments that her grievance, which in any case seems to be genuine, is not being looked into. Now, this damsel is surely in some sort of distress!

New SSP Harkamal Preet Singh Khakh has stepped up the accelerator. Minutes after he joined, he chalked out elaborate plans to take on the mining mafia. These days mining, both daytime and night time, has been banned following the rainy season. The ban came into effect from July 1 and will run till September 30. However, some unscrupulous elements are defying the ban and do evacuation during the night. The city has given them the epithet of “nocturnal miners”. Khakh has rounded up a few of them. The message that went out was loud and clear. The officer is a no-nonsense man and is not going to toe the mafia’s line. His colleagues claim he is deadly against illegal quarrying - daytime or night time. On his part, Khakh says such activities create an ecological imbalance which will be harmful to coming generations. If he has one eye on sand digging, his other eye is on nabbing anti-social elements. In between, he also fends off the threat of drones coming in across the International Border with payloads that include drugs, arms and ammunition. The officer, indeed, is a busy man these days. Residents say they want their SSP to remain busy “for this will make life easier for them”.