Gurdaspur diary: These people do not choose to write ‘DIS’ with their ability : The Tribune India

Gurdaspur diary: These people do not choose to write ‘DIS’ with their ability 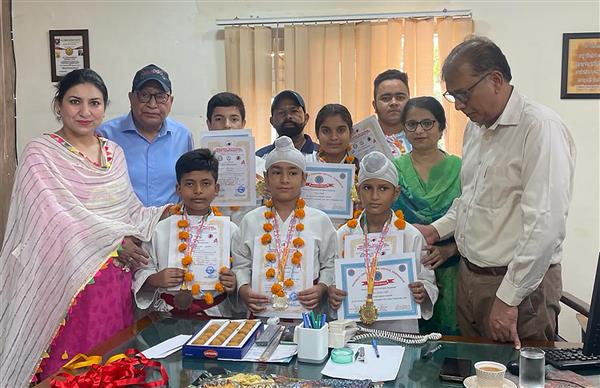 Abled does not necessarily mean en-abled. And disabled does not necessarily mean less-abled. This seemed to be the motto of a 100 odd people who congregated at the HRA International School to acquire prosthetics. Since 2012, Good Samaritan Hira Mani Aggarwal, who is also the chairman of the school management committee, has been holding prosthetic camps for the disabled on an annual basis in the memory of his wife Neelam Aggarwal. His team of students, staff and Principal Suman Shukla, helps him in his endeavour. A team of doctors of the Gurdaspur Civil Hospital acted as facilitators.

The school organised the camp in collaboration with the local unit of the Bharat Vikas Parishad. School management’s secretary Satya Sen Aggarwal was the overall co-ordinator. How many of us having deep pockets organise such endeavours? The answer is: not many. This means the Good Samaritan and the parishad are indeed the “do-gooders” of society. These disabled souls are the true warriors of the world. They are the ones who have every reason to quit but never do so. These souls always find strength to preserve. At the camp, 48 people were given hearing-aids. Two wheelchairs and seven tricycles were also distributed to the needy.

Eight young artists and sportsmen were felicitated by Deputy Commissioner Mohammad Ishfaq at his office in his residence. Courtesy the British Raj, such an entity is called a camp-office. To be precise, a particular area earmarked for meeting visitors and holding official meetings within the DC’s residence is a camp-office. The other day when Romesh Mahajan, Honorary Secretary of Gurdaspur District Child Welfare Council, informed the DC that four young painters — Navya, Ketan, Mitansh and Anshuman — had won accolades in the state-level competition, the officer decided to honour them. On the occasion, the DC also gave a pat on the back to four young karate players — Gurtej Singh, Anmol, Deepak Sharma and Preeti Devi — all of whom have won medals in a local tournament. The eight students were motivated by the officer to achieve something great in life which would make their teachers and parents proud. “You have to learn the rules of the game if you have to reach your objective. And then you have to play better than everybody else,” the DC told the youngsters.

Residents of this border district, where smuggling of drugs is a common occurrence from across the International Border (IB), are peeved at the way the government is handling transportation of drugs in the area. A section of locals said there was no need to enact special laws to deal with the menace. They gave an idea that smugglers should be tried under the anti-terrorism laws of the country. They felt that once a smuggler is tried under these stringent provisions of law, there will be a time in the near future when nobody will dare to transport drugs.