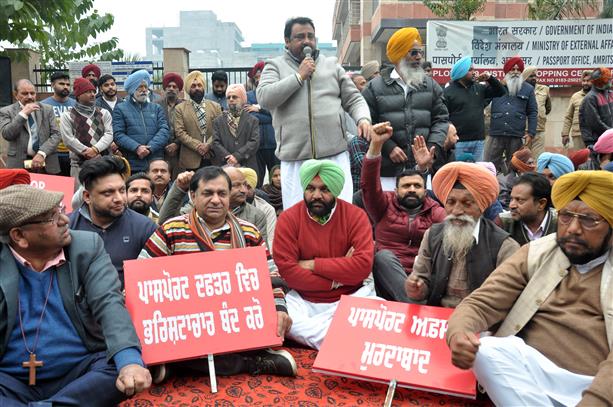 MP Gurjeet Singh Aujla during a protest in Amritsar on Tuesday.

Member of Parliament from Amritsar Gurjeet Singh Aujla today held a protest outside the regional passport office (RPO) and alleged massive corruption in issuance of passports, advancement of appointment dates and the indifferent attitude of officials towards applicants.

Aujla alleged that corruption and harassment of applicants has increased massively since NK Shil took charge as Regional Passport Officer (RPO), Amritsar. He claimed that Shil was contacted directly by him and also by the DC, but he declined to listen to us.

Aujla claimed that during previous RPO’s tenure, hundreds of issues related to applicants were resolved with the intervention by the office of MP.

Today, a memorandum was submitted to Minister for External Affairs through Deputy Commissioner Amritsar. ADC (G) Surinder Singh received the memorandum from Aujla at the protest site. He stated that an aggressive campaign will be launched against RPO, Amritsar, and MEA top brass at New Delhi if NK Shil doesn’t mend his ways.

In his letter to the Minister for External Affairs, MP Aujla gave reference of his previous complaints regarding issues being faced by public in applying and getting passport services at Regional Passport Office, Amritsar (RPO).

“I have mailed on January 10, 2023 to Minister for External Affairs and Minister of State for External Affairs and sent another letter on Jan 19, 2023 to Lok Sabha Privileges Committee through Speaker, Lok Sabha. Amritsar RPO has always been an epicentre of corruption due to the mafia embedded among the staff itself. However, it escalated since NK Shil has taken the charge of RPO-Amritsar on December 14, 2022. I tried to communicate with Shil via the office of Speaker of Lok Sabha but he did not bother to reply to the calls and messages,” alleged Aujla.

Due to the delay in passport services, the discontentment and anguish among the applicants is rising creating issues for public representatives as well as district administration. “I request the MEA to intervene into the matter and consider opening more Passport Suvidha Kendras (PSK), especially in Amritsar, appointing public-friendly RPOs/ARPOs, bringing RPO under review of district development coordination and monitoring committees (DISHA),” added Aujla.

When contacted, NK Shil was not available for comment as he was reportedly in New Delhi to receive an award for the Amritsar RPO from Meenakshi Lekhi, Minister of State for External Affairs and Culture of India.