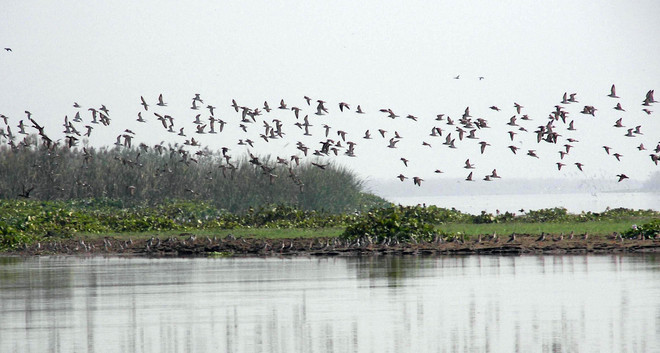 Residents of nearby villages have been asked to inform the Wildlife Department about the death of any migratory bird at the earliest.

In view of bird flu threat, the Harike bird sanctuary situated on the confluence of rivers — Satluj and Beas — has been put on high alert by the administration. In his instructions to all departments, the Deputy Commissioner has asked them to keep an eye on the situation.

DC Pardeep Sabarwal has also asked officials and residents of nearby villages to inform the Wildlife Department about the death of any migratory bird at the earliest so that efforts can be made to check the situation.

The Harike bird sanctuary, inside the Harike wetland spread over an area of around 84 sq km, is home to migratory birds coming from Arctic and Siberia. The Harike wetland, one of the largest wetlands in north India, is listed as a Ramsar site as per the Ramsar convention.

As per records of the Wildlife Department, around 240 various species of migratory birds have visited Harike. The wetland is also home of Indus Dolphin and Seven Star Turtles. Indus Dolphin, which had become extinct species in early 1930s, was spotted in 2007. However according to local residents, these are frequently spotted and they call them ‘Bulan’.

Thousands of birds start visiting Harike in late November and early December to escape harsh winters in their homelands. These birds passing through several countries cover thousands of miles to reach Harike.

With bird flu being reported among birds in Pakistan and Rajasthan, the authorities have asked the department to remain alert. “Though no death has been reported so far, the administration is alert,” said the DC.