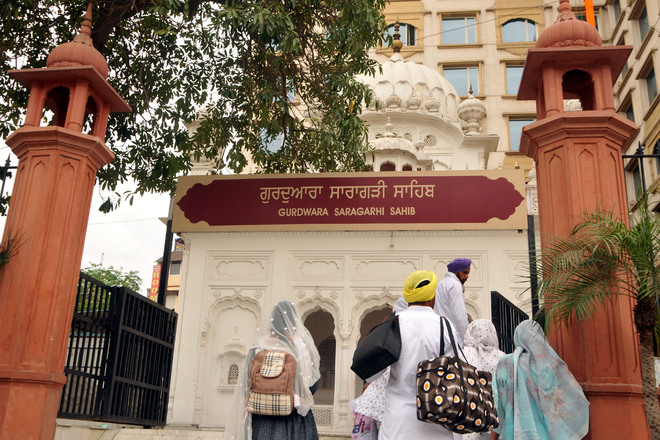 Pandemic fallout Before the Covid outbreak, around 200 to 300 visitors used to register with heritage board every day. Now, the counter is closed due to a surge in the number of Covid cases hitting tourism industry in a big way. Tribune photos: Vishal Kumar

The Heritage Walk of Amritsar, an award-winning project of the Punjab Heritage and Tourism Promotion Board (PHTPM), may witness another blockade in near future as contractual employees of the company outsourced by the board have been given notices of terminating their services anytime. Earlier, a number of employees of conservation projects were laid off.

However, officials of the Tourism Department claimed that the projects had been completed so the services of engineers and other staff hired for conservation were terminated. Following the Covid-19 restrictions, tourism activities are yet to resume in the city. The heritage walk is also facing a sharp dip in the number of tourists visiting the city after the outbreak of the pandemic in 2020.

The heritage walk, initiated in September 27, 2011, on World Tourism Day by the then SAD government and Navjot Singh Sidhu had played a major role in beginning the project. The initiative of the Punjab Heritage and Tourism Promotion Board had received a good response. But later it suffered several roadblocks over the years. Before the outbreak of Covid-19, around 200 to 300 visitors used to register with heritage walks every day. Now, the counter is closed due to a surge in the number of Covid cases.

The walk, which is designed by the Punjab Heritage And Tourism Promotion Board, includes a heritage route inside the walled city that comprises visits to the colonial-era Town Hall, Saragarhi Gurdwara, Akhara Sangalwala Darshani Deodhi, Chaurasti Attari, Katra Ahluwalia, Qilla Ahluwalia, Thakurdwara Duriana Mall and old food establishments along the route.

The notice of the outsourced company reads that project work is going to end anytime. It created panic among the employees but it is also worrisome for those who are expecting the government to boost tourism activities in the city with such initiatives.

Kanwal Preet Brar, Director, Tourism and Cultural Affairs, said, “The projects were completed so the employees were laid off.”

Micheal Rahul, an activist working for the Heritage and Tourism Promotion Board, said, “The city has great potential for tourism but the policies of the government are faulty. It is sad that on the one hand, the state government claimed to promote tourism in the city, but on the other the projects are being ended. Several heritage sites are crying for attention. The heritage walk should continue as it is the only programme which offers stay to tourists in the city, otherwise tourists return the same day after visiting the Golden Temple.”