Hundreds of acres submerged under water in Ajnala : The Tribune India

Hundreds of acres submerged under water in Ajnala 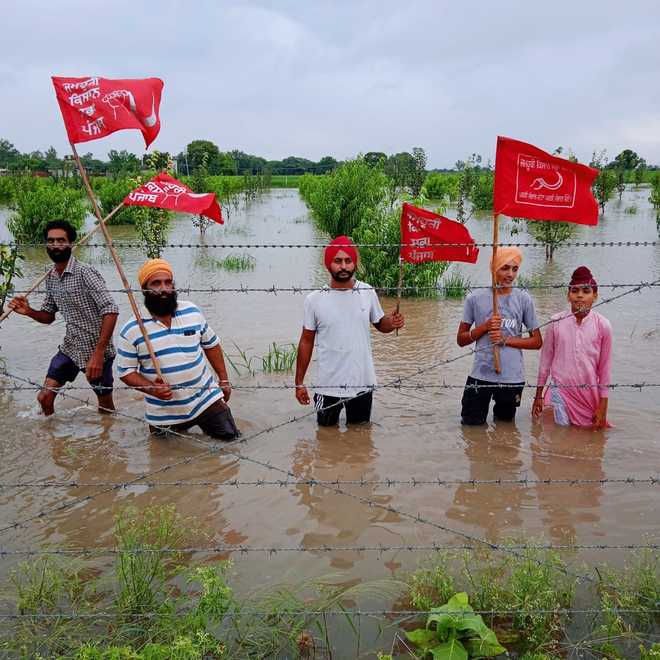 Farmers in Ajnala area protest as the walls of irrigation channel have created a barrier for rainwater causing crops to submerge in water.

The reconstruction of a canal minor without taking into consideration the natural topography of the area for the flow of rainwater has resulted into trouble for farmers, as the walls of irrigation channel has created

a barrier for rainwater and their crops have submerged in water.

Former deputy director horticulture Dr Baaj Singh, who owns an orchard in the area, said the side walls are around 4-5 feet high above the ground. “The water from higher area has flowed towards this side following its natural course. But due to concrete walls, it is now trapped,” he said, adding that his orchard and around 400 acres of paddy crop would be destroyed if the water remained trapped.

Farmers in the area said the Ajnala canal minor passing through Othian was first built in 1952-53. “It remained kucha for many years and then remained dry for many years, but was rebuilt with concrete walls.

Jamhoori Kisan Sabha leader Satnam Singh Chak said: “The farmers have been sitting on protest on this issue for the last 36 days. If the department had taken timely action and built under-passes, farmers would not have suffered the losses which the stagnant water has caused to their crops.”

He said senior administration officials should look into the matter and come to the help of farmers.

Punjab CM Capt Amarinder Singh on Saturday had ordered the Deputy Commissioner to immediately conduct special girdawari to assess the damage caused to the crops and houses due to heavy rains which led to waterlogging in the nearby villages due to flooding of Kasur nullah. Meanwhile, the CM also directed the Principal Secretary, Water Resources, to rush a high-level team comprising senior officers of the department and its drainage wing to immediately swing into action by pressing into service requisite machinery and manpower for dewatering in few villages in Khemkaran area of Patti tehsil. He also instructed the team to further strengthen the flood protection works in vulnerable areas giving it a top priority, so as to prevent recurrence of such incidents in the coming days, in case of any possibility of incessant rains in the region. The CM also asked the district administration to keep its relief and rehabilitation teams ready to face any eventuality arising out of heavy rains. OC