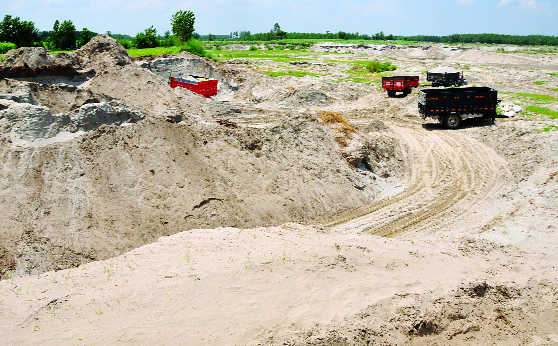 Officials of the Mining Department discovered an illegal sand mining quarry in Raipur Kalan border village in the Ajnala subdivision. Following a complaint by Anmol Garg, Junior Engineer-cum-Mining officer, the police have booked Jatinder Singh of Raipur Kalan village as the land belonged to him. No arrest has been made till now.

In another instance, the Mining Department team confiscated a truck laden with sand in Ballarwal village. Along with truck, the team seized over one hundred cubic feet of sand from the truck.

ASI Major Singh, investigating officer in Raipur Kalan illegal mining case said that the got telephonic information from Anmol Garg following which a police team raided the spot in the village. He said though there was machinery found involved in illegal excavation, but there were fresh marks of tyres of tractor trolleys at the spot.

The team found a 93-feet wide, 83-feet long and around 13-feet ditch from the spot which clearly hinted at the illegal sand mining at the spot. He said as the land belonged to Jatinder Singh, a case under section 21 (1) of Mining and Mineral act was registered against him.

In the meanwhile, ASI Lakhwinder Singh told that following information by mining officials, the police confiscated a TATA truck (PB-30-R-7036) carrying over one hundred feet sand. The police team arrested Daljit Masih, driver of the truck and a case under Mining and Mineral Act was registered against him.