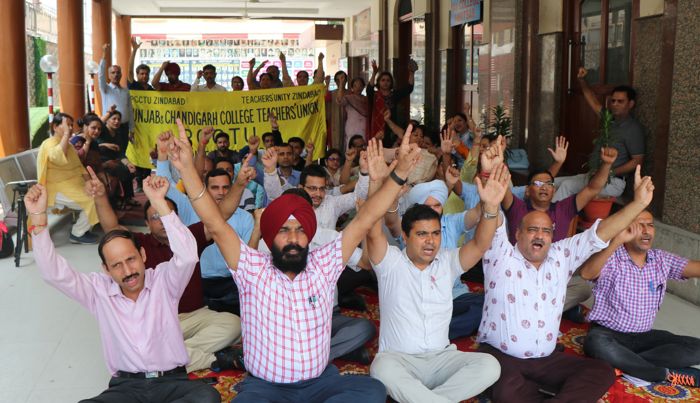 College teachers hold a protest against non-implementation of the Seventh Pay Commission in Amritsar on Thursday. Tribune photo

College and university teachers once again came out on roads against the non-implementation of Seventh Pay Commission for wages. Teachers from city colleges on Thursday held a two-hour dharna in their respective colleges and once again warned the government on the issue. Meanwhile, teaching remained suspended for two hours in all colleges of Guru Nanak Dev University and Punjabi University, Patiala, as well.

Punjab and Chandigarh College Teachers’ Union (PCCTU) general secretary Dr Gurdas Singh Sekhon, who is a faculty member at DAV College, said until the government implements the Seventh Pay Commission for college teachers, no activities and teaching would be carried out in the universities and colleges.

“There is no dearth of facilities and perks for MLAs and ministers, but when it comes to rights of teachers, all sorts of financial difficulties appear. The Seventh Pay Commission has been implemented in all states of the country, except Punjab. Why isn’t the state government bothered about the teachers? We demand that Chief Minister Bhagwant Mann should look into the matter and get it implemented soon,” he said.

Dr Sekhon said if the government failed to announce the implementation of the Seventh Pay Commission, a state-level rally would be organised at Barnala on September 5.