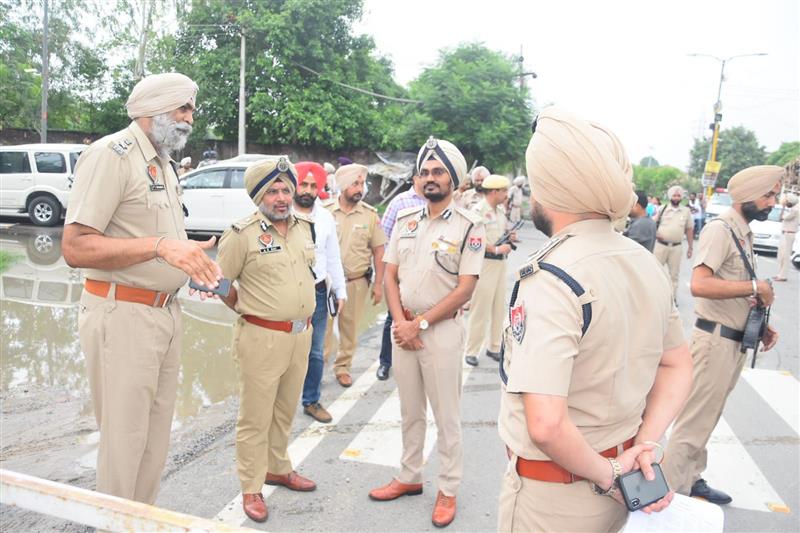 ADGP (Traffic) AS Rai talks to cops deputed at a naka in Amritsar on Saturday. Tribune photo

On the orders of Director-General of Police, Punjab, Gaurav Yadav, the Punjab Police on Saturday carried out a special drive against drugs and drug peddlers in the district with the police conducting search operations for three hours in the city. All the entry and exit points of the city were sealed by setting up police checkpoints and vehicles were checked.

According to information, as many as 74 check points were installed at various points of the city and 1,100 cops were deputed at these nakas.

Talking to mediapersons, AS Rai said the step was taken to nail drug peddlers and criminal elements. The city police have identified various localities, including Anngarh, Gujjapura and Maqboolpura, where drug peddling was rampant and that witnessed various criminal activities.

“A search operation was being carried out by the police in these localities to nail criminal elements and drug peddlers. There has been clear instructions from the Punjab Government and the state police chief about zero tolerance towards them. The Punjab Police have vowed to free the state from gangster culture,” said AS Rai.

During the search operation carried out by the police, they confiscated around 35 gm of heroin from five persons, 57 bottles of English wine and 118 bottles of illicit liquor. Separate cases under the NDPS Act and the Excise Act were registered in this regard.

The ADGP also urged the people to maintain law and order, besides informing the police about those involved in the drug trafficking and illegal activities in their areas. He said their names would be kept secret while immediate action would be taken on the information received.

Meanwhile, in Tarn Taran, during a special drive, four persons were arrested with heroin by a police team manning a checkpoint at the T-point near the local Majha College for Women here on Saturday.

Inspector General of Police Rakesh Agarwal and Senior Superintendent of Police Ranjit Singh Dhillon checked all 51 police nakas set up in different parts of the district.

The accused who were arrested with heroin were returning from Patti twon after taking the consignment from their particular location. A police team left to nab a Patti-based drug trader.

IG Rakesh Agarwal said the drive was aimed at creating terror among anti-social elements and to develop a sense of security among the peace-loving citizens.Besides, the special team visited nakas in Harike, Naushehra Pannuan, Sheron, Doburji, Gohalwar, Jhabal, Sarai Amanat Khan, Bhikhiwind, Khalra and other places.