They have conned over 100 persons so far: Gurdaspur police 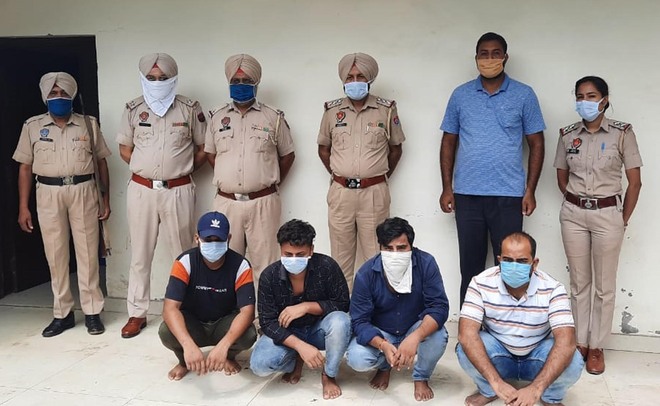 The four members of the gang who were arrested from Delhi by the Gurdaspur police on Thursday.

The Gurdaspur police on Thursday arrested four members of an inter-state gang involved in fraudulently transferring funds from the accounts of gullible people to their accounts through the internet banking process. Senior officers claimed that the gang had so far conned a score of local residents and over 100 persons belonging to different states.

SSP Rajinder Singh Sohal said the police had been working on the case for quite some time. “A team of Dinanagar police station nabbed four gang members from New Delhi on Thursday evening,” said the SSP.

Pardeep Yadav, Jeetu, Neeraj Sharma and Jayparkash, all high-tech cyber professionals based in the national capital, were taken on police remand till August 30. The police said the modus operandi adopted by them was highly sophisticated and “it was indeed a difficult case to crack”. Local residents who had applied for jobs through an internet recruiting agency would be targeted.

In the first week of August, a school teacher, Preet Kiran, received one such call informing her that “she had been selected for a job based on her educational and professional qualifications.”

Minutes later, she was sent a link on her WhatsApp number. She was asked to click it following which she received a form. She then proceeded to fill her personal details in the form. Later, she got another call asking her to give her bank account details “so that her monthly salary could be deposited in that account”.

Moments later she got an OTP. A caller then asked her to share the same. The next day, Kiran Preet was shocked to see a message from her bank claiming that she had withdrawn Rs 5 lakh from her savings account which actually she did not. She approached the police.

Zeroing in on culprits

SSP Rajinder Singh Sohal formed a team of young policemen who were trained in the specifics of cyber crimes. The team was led by SHO Kulwinder Singh.

The team managed to zero in on a private bank in New Delhi where the gang members had opened an account to which the money of people like Kiran Preet would be transferred.

On their part, after scrutiny, the bank found the account had been opened based on fake documents, including the conned Aadhaar and PAN cards. A woman banker, however, managed to identify the tricksters and told the police that they regularly visited the bank to withdraw money.

For 72 hours, a team of four policemen stationed itself outside the bank. Finally, two of the fraudsters walked into the bank and were nabbed after they were identified by the woman banker. Two other members were arrested on information provided by the arrested ones.

The SSP added that there were a total of eight members and the remaining ones had been identified and would be arrested soon.