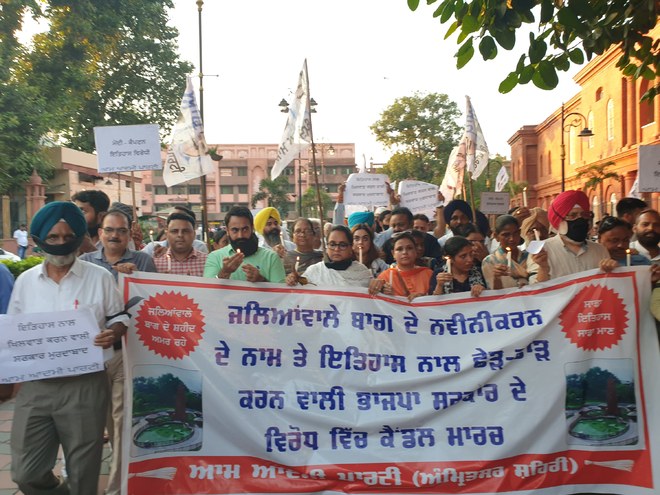 Up in arms AAP leaders and party workers during a protest march held against the renovation of Jallianwala Bagh in Amritsar on Wednesday. Tribune photo

The Centre has been facing flak from historians, residents and families of martyrs regarding renovation of the Jallianwala Bagh.

Aam Aadmi Party (AAP) took out a candlelight march on Wednesday and slammed the Prime Minister Narendra Modi-led NDA in the Centre.

Jivanjot Kaur, urban district chief, AAP, said the beautification of Jallianwala Bagh has been ‘tampered with’. “It is an attack on the history and heritage of Punjab by Bharatiya Janata Party, under a well-thought-out conspiracy. A society that does not knows its history is like a man who has lost his memory.” She said the Central Government has made a historic mistake by spending Rs 200 crore on something that has hurt the feelings of people, including families of the martyrs.

AAP leader Prabhbir Singh Brar said a pistol in the hand of the statue of Shaheed Udham Singh inside the Jallianwala Bagh was a symbol of courage and bravery. “Now, it has been removed in the name of renovation,” he said.

Dr Inderbir Singh Nijjar, in charge, AAP south constituency, said changes made at the entrance of the Jallianwala Bagh has changed the entire experience. “The light and sound show that has been started now doesn’t seem to gel with the sentiment the Jallianwala Bagh invokes. It is a memorial not an amusement park,” he said.