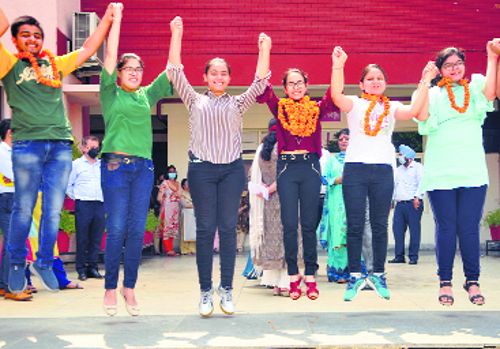 Gurdaspur: With the CBSE not drawing up a merit list this year, confusion prevailed throughout the day over the toppers of the district.

It was after a lot of effort that the confusion got cleared. The first three positions in the district were bagged by students of Jiya Lal Mittal School. Apoorav Tandon bagged the first place by securing 96.8 per cent marks. She was followed by Navneet Kaur (95.6 per cent) and Andika (94.8 per cent) who came second and third.

Other students who excelled were Ronit Saini (92.4 per cent) of TC International School and Chetna Saini (92 per cent) of Sumitra Devi Arya Senior Secondary School, Dinanagar. School principal Upma Mahajan said Chetna would be felicitated when the school reopens. — TNS

Manjot on top in Tarn Taran

Tarn Taran: Manjot Kaur of the local Majha Public School emerged topper with 96 per cent marks in the district. She was followed by Ranbir Kaur of the local Mamta Niketan School and Rupinder Singh of Sri Guru Harkrishan Public School, Patti, who came at second position with 95.2 % marks each, while Damandev of the local Sri Guru Harkrishan Public School secured the third position with 95 per cent marks. Dr Raman Dua, principal of Majha Public School, said Manjot Kaur who emerged topper was a very industrious and disciplined student who did not get even a single holiday in the whole year. — OC