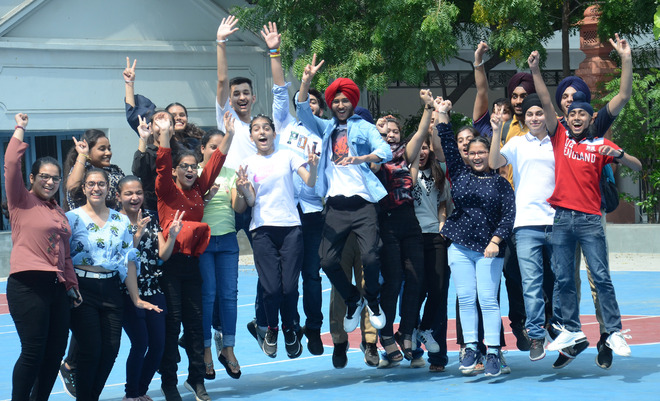 Topper Hargun Preet Singh (red turban) celebrates with his classmates at Senior Study School after the announcement of the results in Amritsar on Tuesday. Photos: Sunil kumar

Beating the pandemic blues, students of CBSE Class X celebrated their academic success as the results were declared on Tuesday.

Since the CBSE did not release any merit list this year, the number of students crossing the 90 per cent mark was high. Hargun Preet Singh from Senior Study II became the district as well as state topper scoring 99.8 per cent, followed by Kashvi Aggarwal from DAV Public School, who stood second with 99.6 per cent. The third position in the district was shared by Roop Amandeep Singh, Kavya Gupta and Shranay Malhotra, all students of DAV Public School, who scored 99.4 per cent.

Beating the pandemic with perseverance

Hargun Preet Singh, who managed to score 499/500 (the best of five core subjects) in Class X, shared his excitement over the result by hugging his parents for the longest time. In a year that was full of uncertainty and horror of second wave of Covid-19, Hargun, too, had struggled to keep his mind focused. “He was an excellent student throughout and the stress of online studies and being locked down affected his mental health a lot. Hargun is a zonal-level table tennis player and he started playing table tennis to relive his stress. It really helped him to keep his mind focused on academics,” his father Amritpreet Singh, shared. Hargun’s elder brother Jaskaranpreet scored 97 per cent in the CBSE Class XII exams this year. Great grandson of former Jathedar, Akal Takht, Giani Chet Singh, Hargun wants to make a name in the field of robotics engineering. When not studying, he keeps himself busy by making robots out of spare parts. 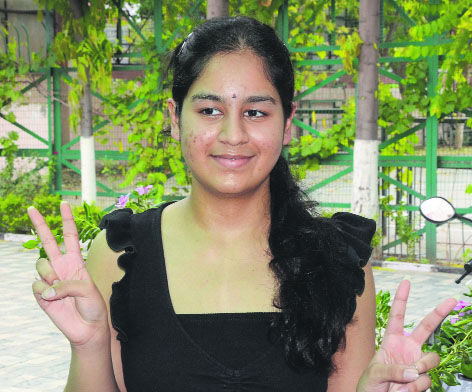 Brimming with confidence and smile, Kashvi Aggarwal hugged her friends as she fed them laddoos and got a mouthful for herself as well. Scoring 99.6 per cent in CBSE Class X is no mean feat, especially so when all academic activity shifted to online mode. Despite her consistent performance academically, Kashvi said she had a tough time in keeping her academic rhythm going during lockdown. “I am a single child. So, mostly when I used to feel stressed, I used to spend time with my parents and play with them. My father is a good badminton player and I, too, had played the game till district level. So, I used to play badminton everyday and then spend 2-3 hours studying. It really helped in keeping my sanity,” she shared. Content with her results, Kashvi said she wants to pursue business management and become an entrepreneur.