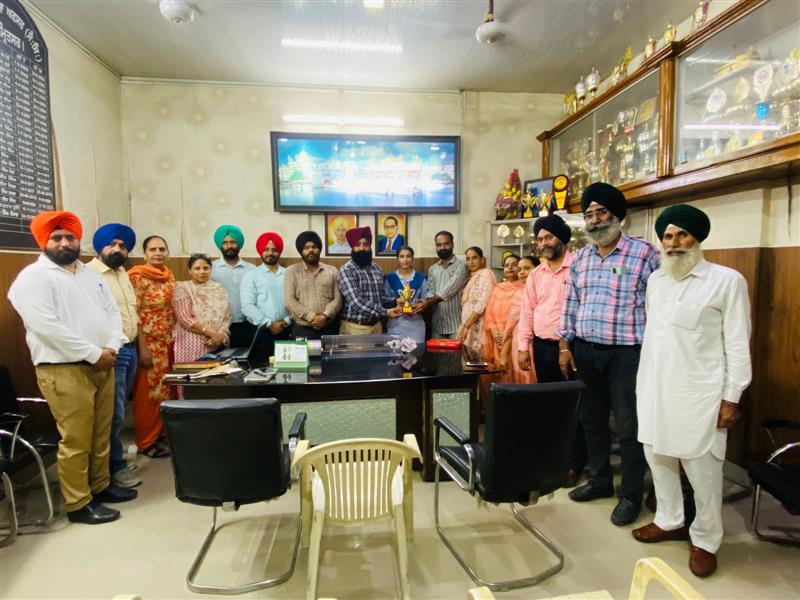 Kiranpreet Kaur, a student of Class XI, being honoured by the DEO. Tribune photo

Kiranpreet Kaur, a student of Guru Teg Bahadur Public School, Khankot, has secured first rank at the national level in the biology Olympiad.

She had taken the test in December 2021, the results of which were released recently. A student of Class XI, Kiranpreet was honoured by a team of officials from the District Education Department, including Jugraj Singh Randhawa, DEO, secondary.

An aspiring doctor, Kiranpreet was accompanied by her parents while she received commendation for her academic achievement.

Common Services Centres have been set up across the country under the Digital India programme as access points of delivery and facilitators of e-governance services in rural as well as urban centres. The programme being run under the Union Ministry of Information and Technology every year conducts a national-level Olympiad of various subjects for students of Classes IV to Class XII, where students are rewarded with scholarships and prizes.

“It is a moment of immense pride that a student from a rural area got the first position. She proved that if you have the focus and work hard to reach your goal, anything is possible. It is a popular belief that students from villages or rural belt lag behind, but that’s not true. Kiranpreet is an example that dedication and grasp of your subject can make you succeed even if you face some challenges,” said DEO Jugraj Singh, appreciating the efforts of Kirandeep.

Currently, registrations are on for this year’s Olympiad, which will be conducted in December. The DEO said in recent years, an increased response has been observed from students of government schools and PSEB-affiliated schools for academic Olympiads.