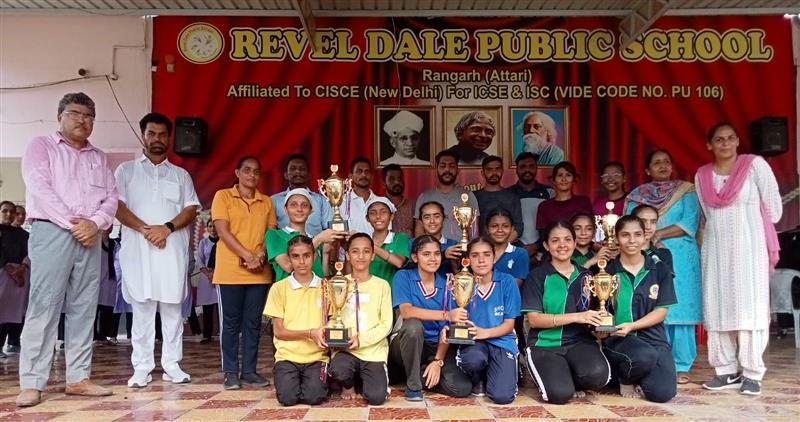 The winners of the kho-kho competition with trophies organised at Revel Dale Public School, Rangarh, Attari.

The valedictory session of two-week online refresher course in humanities was held at GNDU. More than two dozen resource persons shared their expertise on the subject of social science and humanities with the participants and updated them about the latest happenings in their respective disciplines. Renowned zoologist of international repute and Dean, Students Welfare, of the university, Prof Anish Kumar Dua was the guest of honour on the session. Prof Dua while sharing his experience with the participants said, “We need to broaden our vision.” According to Prof Dua, “To be happy, one has to be good practitioner of employing human values and professional ethics in one’s daily lives.” According to him, “Self-affirmation is very important and one needs to tell oneself that I can do it. At the beginning of the day, everyone should tell himself/herself that I can do it. In the concluding remarks, Prof Dua advised all participants to have faith in their capacities.

Under the directions of the Chief Khalsa Diwan, the martyrdom of Sardar Udham Singh was marked at the Central Khalsa Orphanage by hosting a gurmat event. Students of Shaheed Udham Singh Memorial School and Bhai Vir Singh Gurmati College located inside the orphanage recited Sri Sukhmani Sahib path together and then the students of Gurmati College performed Rasbhina Kirtan. Under the supervision of orphanage member incharge Mohanjit Singh Bhalla, the students of the programme gave a beautiful presentation of poems dedicated to the memories of Shaheed Udham Singh. During the event, the sacrifice of all martyrs of Jallianwala Bagh tragedy and the brave nationalist Shaheed Udham Singh, who avenged this incident, were also made known. Udham Singh had spent time in the orphanage from 1907 to 1919 and later a museum of sorts was created inside the orphanage. Bhai Veer Singh Gurmati College students who have completed the session were distributed certificates as well as prayed for the commencement of the new session.