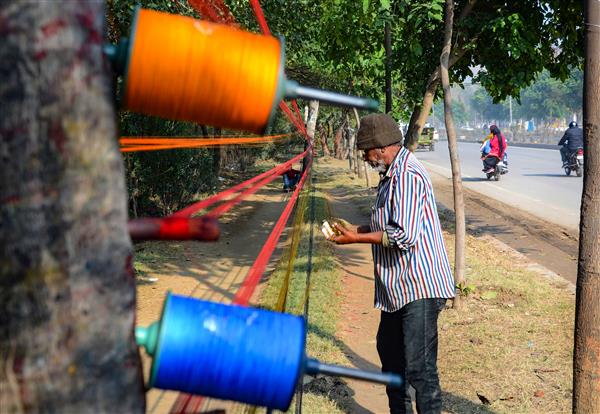 A worker prepares coloured threads to be used for kite-flying, ahead of the Lohri festival, on the outskirts of Amritsar on Tuesday. PTI

Even though the sale and use of plastic kite-flying thread has been banned for over a decade now, it is still very much popular and used by kite flyers till date.

The ‘plastic dor’ or ‘dragon dor’ as it is being referred to locally, due to its elasticity and sharpness, is so popular that it has eaten up the business of traditional dor makers.

The hundreds of ‘addas’ of dor makers, where they process and mature the thread with crushed glass and adhesives, which were seen at every road of the city over a decade ago, are no longer visible. Darshan Lal, a dor maker said: “Now, nobody wants the traditional thread as it is costly and is no match for the plastic thread in kite-flying competitions.” He said most of the artisans have shifted to other businesses. He said plastic dor along with the factory-made thread has completely taken over the traditional industry.

Bakshish Singh, another dor maker from the old days, said: “I had over 20 people working for me. Now, I am alone.” He said people used to place orders weeks in advance to lay their hands on a ‘charkhari’ (roll) of ‘sangal’ dor. The sangal dor was the strongest thread in those times, but now, it is no match for the plastic ones,” he said.

The plastic kite-flying thread, which does not break easily and results in deeper cuts on coming in contact with the skin, has been a cause for countless accidents. In the past few years, it has not only caused serious injuries to people, but has also resulted in a few deaths.

While the festival of kites Lohri is just two days away, the plastic thread seen entangled in electricity wires and hanging from trees, is clearly an indication of it being used openly. Residents demanded that ban on the sale and use of plastic thread should be strictly implemented.