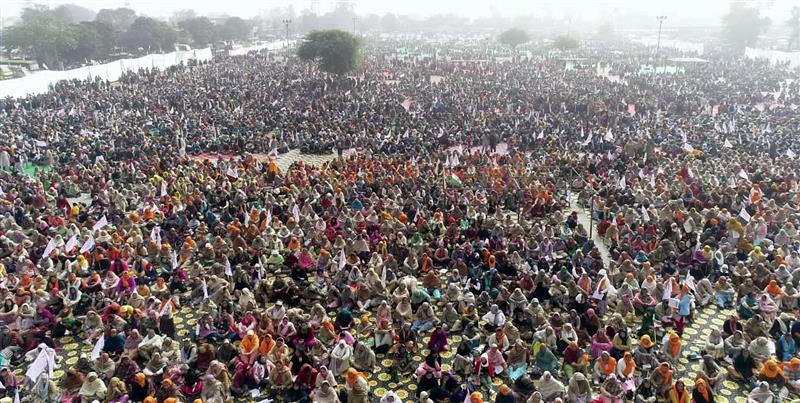 Farmers gather in large numbers during a rally organised by the KMSC at Jandiala in Amritsar.

The Kisan Mazdoor Sangharsh Committee (KMSC) organised a massive rally on January 26, in Jandiala, against the corporate sector’s invasion in the agriculture sector and marked the day as Fateh Diwas. Sarwan Singh Pandher, general secretary, Kisan Mazdoor Sangharsh Committee, said more than one lakh farmers, labourers, women and youth from Punjab, Haryana and UP participated in the historic ‘Alternative building rally’.

Tributes were paid to 750 peasant workers and martyrs of peoples’ movements across the country and the world, including Navrit Singh Dibdiba, who was martyred in a clash with police on January 26, 2021. The families of the martyrs were honoured.

Addressing a large gathering of the masses, state president Satnam Singh Pannu stated that the pro-imperialist policies of the Indian state would be uprooted by a mass movement and a pro-nature and pro-people state will be brought in.

Sukhwinder Singh Sabhra, Gurbachan Singh Chabba, Harpreet Singh Sidhwan, leaders of the KMSC, addressed the rally and announced that effigies of the Modi government will be burnt at district, zone and village-level across Punjab on January 29, in protest against the attack on Delhi morcha stage of the Kisan Mazdoor Sangharsh Committee with the connivance of the police on January 29, 2021. The leaders said by setting-up a labor and nature-friendly agricultural policy in the state, agro-based small scale industries would be set-up in the villages.

Will be taken to hospital to decide upon diet issue