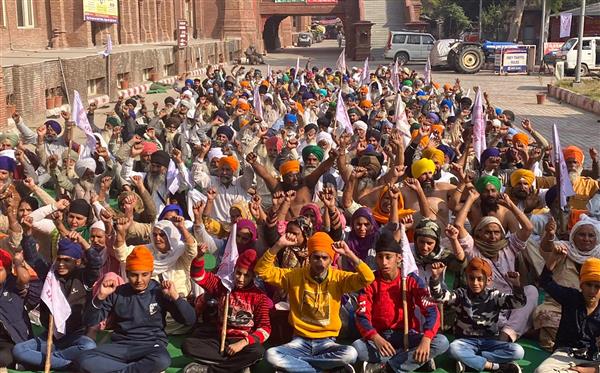 Farmers under the banner of Kisan Mazdoor Sangharsh Committee (KMSC) are camping outside the deputy commissioner’s office here in support of their demands. The volunteers associated with the farmer union have also started cooking meals at the place to feed the protestors.

The farmer leader stated that they would not leave the place until their demands are accepted by the government. The farmers took off their clothes in protest and shouted slogans against the government to express their resentment. The KMSC had initiated an indefinite protest on Saturday.

General secretary of the union Sarwan Singh Pandher said, “The Aam Aadmi Party government in state has left the BJP-led Central government behind in making false claims and spreading lies.” He said when the state is facing problems like drugs, unemployment, poor law and order and decreasing farmer incomes, it is illogical for the government to ask people to wait and give the government some time. “This is no time to wait. The government should act to resolve these problems,” he added.

Farmer leader Gurbachan Singh Chaba said factories and industries are polluting river water and groundwater. He demanded that the government should act against the units disposing polluted chemical mixed in ground through reverse boring techniques.

“While the state is staring at a huge water scarcity, the government has no policy to recharge groundwater reserve. Even the farmers and residents are forced to draw groundwater for irrigation and drinking purposes,” he said.

The indefinite protest by the farmers outside the DC office is being managed on the pattern of the year-long agitation at Delhi borders. While the trolleys are being used to sleep at night, essentials such as milk, vegetables and others are being supplied by the volunteers from nearby villages.

Politically, KMSC is one of the largest farmer unions with its core support base in Amritsar and Tarn Taran districts. The association though has been participating in all protest calls given by Samyukt Kisan Morcha but always maintained and asserted its separate identity. Even now when the SKM had announced to submit a memorandum to the Governor, the KMSC chose to hold protests at DC offices.