Leaders were more frequent with FB lives, video calls ; Daily meetings at offices, residences were held in the open instead of AC rooms 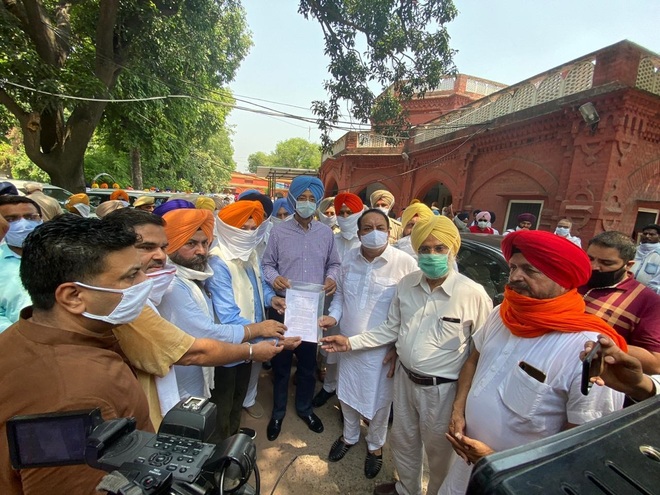 As the Covid-19 pandemic has changed the way of working in almost every sector, politics has not remained immune. The life and routine of common people have undergone a tremendous change. To stay afloat, political leaders had to adapt to newer strategies afloat.

According to some politicians, the biggest change that has happened in their lives is that they no longer get invites for functions such as marriages, anniversaries, bhogs, fairs, social gatherings, etc, which used to take a whole lot of their time of day.

If there have been relatively less political rallies and meetings in the past four months, there has also been witnessed a change in their daily activities, too, as they remained engaged in distribution of ration, medicines, PPE kits, masks, truckloads of vegetables, sanitisation of markets and mohallas and sending migrants back via trains.

By not holding their show of strength, politicians feared they would lose their face in the general public as their faces stopped featuring in the media where doctors, health workers and cops hogged the limelight. So, as soon as the lifting of lockdown restrictions began, they did not shy away from handing over memorandums to authorities concerned, organising public meetings and holding rallies to protest the policies of the government and tragic developments such as hooch tragedy. But they avoided holding press conferences, as that would have broken the the cardinal preventive norm of social distancing.

While leaders of the Opposition parties in the state, ie the SAD-BJP and the AAP, lashed out at the ruling Congress over “inefficiencies” in the ration distribution system and its handling of the hooch tragedy, the Congress took on against the Centre by holding agitations against agricultural-related Ordinances. But none of the agitations involved huge gatherings and were mostly confined to a symbolic dharna, followed by the submitting of a memorandum to the DC.

While no action was taken against leaders of the SAD, BJP and the Congress who violated the MHA guidelines, common people were immediately slapped with challans for violations of the Covid-19 norms.

Cases were also registered against farmers for staging protests and labour leaders who protested against the state government over the hooch tragedy at Muchchal village.

Allegations of bias in distribution of relief

During the lockdown, allegations of bias in the distribution of relief material flew thick and fast. Rajesh Honey, former president of the district unit of the BJP, accused Congress leaders of ignoring families aligned with the Saffron party, Shiromani Akali Dal, AAP and Left parties while distributing ration. He said Congress party workers and sympathisers were preferred. He referred to complaints constantly pouring in like the ones from Muslimganj, Mustafabad and many other areas of the city.

Amarjit Singh Asal, a Left party leader, had pointed out that the people stuck in focal points and other industrial areas were those who were waiting for ration supply.

Politicians, too, got infected

Didn’t practise what they preached

What leaders have to say...

During the lockdown, the biggest problem faced by us was to get access to officials. Only two persons are allowed to meet the officials these days. The availability of officials has also been an issue. Another problem that we are facing is that huge gatherings and agitations cannot be held. It took us a lot of time to tell the people to take to digital technology to report any issue to us. — Shwait Malik, BJP leader and Rajya Sabha member

The biggest change that has happened in my working is that I no longer have to attend weddings, bhogs and melas. The job of a politician has been more of management during the pandemic. As a politician and representative of people, I have had to step into the public while trying to keep myself safe, too. After all, I have to honour my commitments made to masses during elections. — Gurjeet Singh Aujla, MP

Public meetings, which were the need of the hour owing to nagar panchayat elections which can be declared anytime, are not possible these days. But we are somehow trying to make up by initiating a drive “Tea with volunteers” in which five to seven persons visit. We are holding video conferences and following other social media platforms to remain in touch with voters. — Kuldeep Singh Dhaliwal, AAP leader