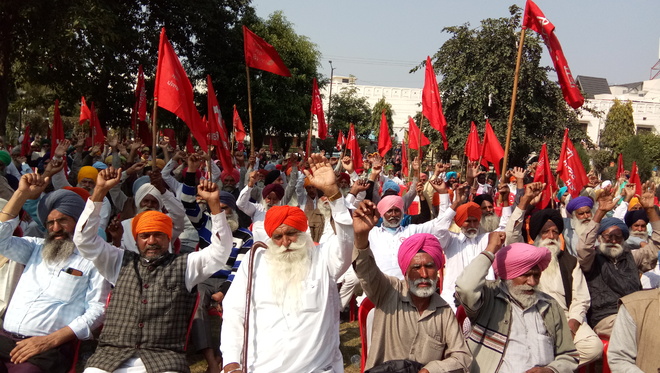 Workers of Left parties hold a protest against the new farm laws in Tarn Taran on Monday. Gurbaxpuri

The Communist Party of India (CPI) and the Revolutionary Marxist Party of India (RMPI) under the banner of ‘Anti-fascist attack front’ organised a conference today under the chairmenship of Rupinder Kaur Marimegha and Jasbir Kaur Tarn Taran. Mangat Ram Pasala, general secretary, RMPI, urged people from all the walks of life to come out in support of farmers against the contentious three agri laws.

Harbhajan Singh, member, CPI, said farmers’ stir has become a mass movement across the country. The duo alleged that the Centre was ignoring sentiments of millions of farmers in order to fill coffers of a handful of their favorite corporate.

They said laws were not only a means of subsistence for the vast majority of population of the country, but were equally against the interests of small and medium enterprises and retailers. Implementation of these laws will result in unemployment, poverty and starvation, they said. Pasala said communal tactics, misleading propaganda and oppressive measures taken by the Central Government to derail the peasant struggle could have dire consequences in near future.

Prithipal Singh Marimegha, member, CPI, said labour laws were being flouted with impunity. Mukhtar Singh Malla of the RMPI said intellectuals, writers and journalists, who showed truth were being tried for treason.