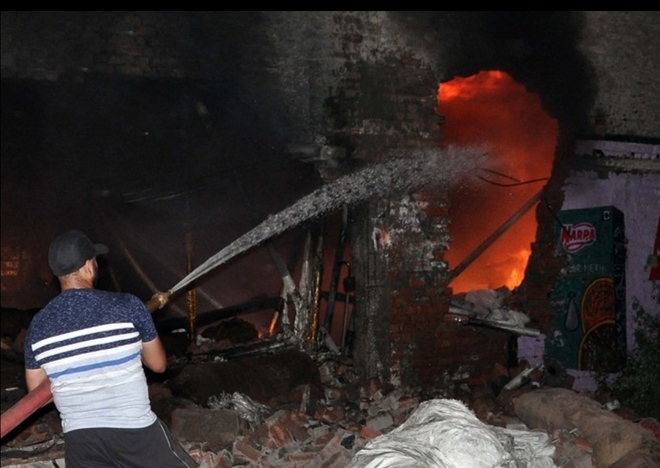 A firefighter tries to douse flames at a knitting factory on Batala Road, Amritsar. File photo

The gruesome accident at an under-construction factory in Ludhiana has acted as a wake-up call for industrialists, district administration and industry officials here and be ready to handle any natural and man-made disaster.

Experts are of the view that a robust disaster resilience and response architecture is a must in fast-changing scenarios.

Moreover, the nature of disasters is undergoing changes as challenges in the form of urban flooding, borewell deaths, colliery collapses, forest fires, uncontrolled urban development, growing deforestation, rapid industrialisation leading to chemical and radiological accidents are there. The company was involved in lintel elevation of the roof without confirming to the established norms in the accident that occurred in Ludhiana.

Not long ago nearly 10,000 quintals of molasses spilled over from the storage lagoons of a sugar mill at Kiri Afghana in Gurdaspur district into a drain leading to the Beas river. Aquatic flaura and fauna, including fish, had perished as oxygen depleted in the water due to the pollution caused by molasses.

Fires are common disasters as a majority of factories here don’t have fire-fighting equipment. Many factories in the city don’t comply with safety norms. Most of the industrial units are located in residential areas in the city. It makes the task of rescue workers extremely difficult.

A majority of these factories use combustible materials. Apparently, continuous overlooking of safety measures in factories cause fires.

In the city’s master plan, the government had proposed to set up three more major industrial pockets.

A plot in Focal Point on the GT Road is earmarked for setting up fire-fighting office. However, it is lying vacant as the government has not bothered to make the move.

“Disaster management requires swift reaction and smooth movement to curtail the loss of men and material. A majority of these buildings do not have smoke-detection alarms and sophisticated fire extinguishers,” he said.

Some employees at these units must be trained to respond and combat any disaster and its aftermath.

Keeping in view a large number of industrial units and their scattered presence, he stressed on the need to have disaster risk-management response team.

Many past incidents such as bursting of a boiler in a factory on Ajnala Road and fire breakout at Khanna paper mill are grim reminders available locally. This should have prompted the authorities to take safety measures seriously, he said.

What happened in Ludhiana on Monday

Four persons died and nine were injured, when the roof of an under-construction auto spares unit collapsed in Ludhiana on Monday. It is learnt that the level of the roof slab (lintel) of the top floor of the multi-storey building was being raised from 6 feet to 9 feet by employing 50 jacks that, too, without soliciting permission from the Ludhiana Municipal Corporation.