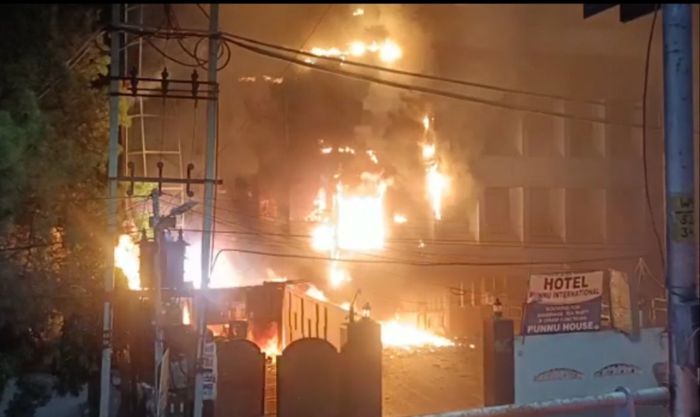 A major fire broke out at Hotel Pannu International on the Court Road in Amritsar late on Saturday night. Tribune photo

A major fire broke out at Hotel Pannu International on the Court Road late on Saturday night. No casualty was reported and the firefighters rescued three persons from the blaze.

According to the information, the fire broke out around 11 pm inside the hotel. The Fire Department was informed, but before the fire tenders arrived, more than half of the hotel was up in flames. The fire spread rapidly due to the excessive wooden work and flammable material used for decoration.

The firemen found that three persons were trapped inside. They were rescued safely. Around eight fire tenders of the MC and Sewa Society worked for around three hours to completely douse the flames. More than half of the hotel building was damaged in the incident. A car parked in the hotel was also damaged. Fire Department officials claimed that no one was hurt. The cause of the fire is yet to be ascertained.

The operation was led by fire officials Anil Luthra and Ravinder Kumar.

“Soon after getting the information, we reached the spot. Three of the hotel staff were inside. We rescued them. Then, we controlled the blaze to prevent it from spreading to nearby buildings. The reason behind the fire is unknown. The workers claim it might be due to a short-circuit,” a fire official said.

The hotel witnessed major damage to the building and furniture. Panic gripped residents in nearby localities on Court Road as flames were quite high. The fire was doused completely around 2 am.