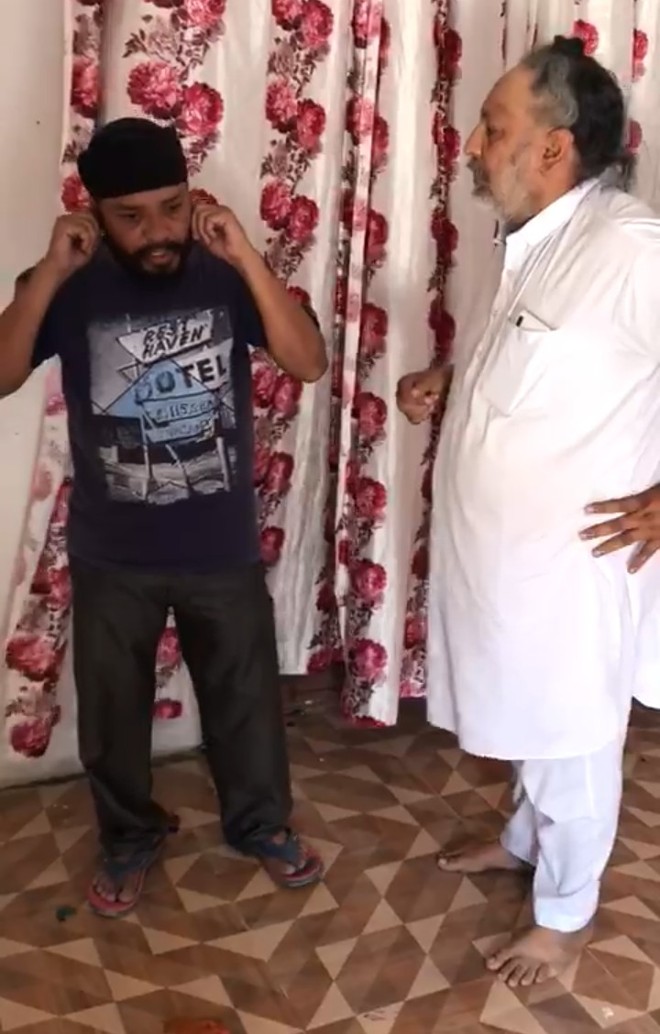 A video grab of the incident.

In a shocking incident, a man was kidnapped and brutally thrashed by five persons allegedly at the behest of a prominent SAD leader from Amritsar South constituency.

The victim said the accused bundled him up in an SUV and took him to a house, where they pointed a revolver at him and removed his clothes, while recording the video. He said he was forced to drink urine also. Later, they allowed him to go threatening to make the video viral on social media in case he told about the incident to anyone. He said, ashamed, he neither went to work nor outside. Nevertheless, they uploaded the video of him being slapped on social media. He started getting calls from people and therefore decided to lodge a complaint.

Dilbagh Singh, the victim, alleged that he was also forced to drink urine by the accused. Though the incident took place on July 2, the victim lodged a complaint with the police on Monday after the accused uploaded the video of him being thrashed on social media, and he felt ashamed.

As per the details, Dilbagh Singh had allegedly circulated some voice message around one-and-a-half months ago, in which he is heard abusing the SAD leader. Upset over this, his men were looking for him.

Dilbagh, a resident of Patti Baba Jeevan Singh, Sultanwind village, said on July 2 around 7am, Bikramjit, Sabha and Balwinder Singh came to his house and started abusing him, while threatening to kill him. He said his wife made a video of the incident on her mobile phone. He said as people in the area started gathering, the accused fled, threatening to teach him a lesson.

He said on the same day, around 5pm, when he was returning home from Patti Balol in Sultanwind village, the accused bundled him up in an SUV driven by Bikramjit Singh. He alleged that they thrashed him in the vehicle and took him to Bikramjit’s house. He said in the drawing room, they pointed a licenced revolver at him and Sabha Mantri forcibly removed his clothes, while Manpreet Bonny recorded the video. He said Bikramjit forced him to drink urine. Later, they gave him his clothes and started slapping him while abusing him continuously.

He said they later let him go threatening to make the video viral on social media in case he told about the incident to anyone. He said he remained quiet and felt ashamed. He neither went to work nor outside.

Nevertheless, the accused uploaded the video of him being slapped on social media. He started getting calls from known people and he felt ashamed and therefore decided to lodge a complaint.

Perneet Singh Dhillon, SHO Sultanwind police station, said the police have registered a case of kidnapping, assaulting with intent to dishonour a person and other relevant sections of the Indian Penal Code besides the Arms Act and Information Technology Act following Dilbagh’s complaint and further investigations were on. No arrest has been made so far.