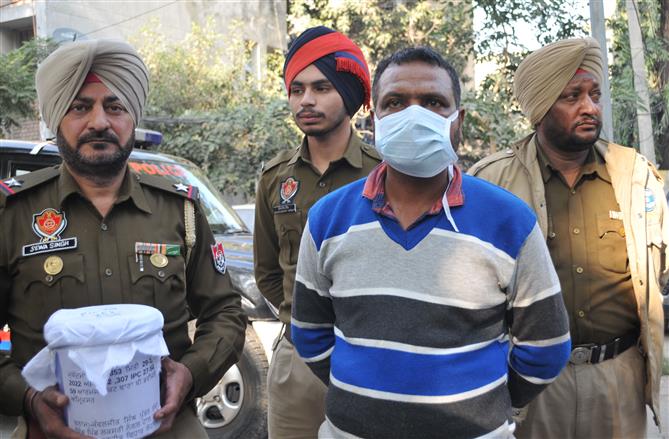 Police officials with the accused in Amritsar. Photo: Vishal Kumar

A man was shot dead by an ex-serviceman over a minor issue in the East Gobind Nagar area located on Sultanwind Road late last night.

The deceased has been identified as Shamsher Singh of Chohan village. The accused was identified as Kanwaljit Singh of Ranjit Vihar on Loharaka Road.

Police Commissioner Jaskaran Singh said the accused was arrested within an hour of the incident. The police seized his licensed weapon used in the crime along with six live bullets.

A case under Sections 302 and 307 of the IPC and Sections 27, 54 and 59 of the Arms Act was registered against him. He said the accused was having a grudge that his in-laws were ignoring him in front of his brother-in-law Shamsher Singh.

Mandeep Kaur, wife of the victim, stated to the police that at her younger sister’s wedding on Sunday, her elder sister had come with her husband Kanwaljit. On Monday, he came to her parents’ home in the East Gobindpura Nagar area in inebriated condition. He entered in a heated argument with other family members and shot dead her husband. The accused fled the spot. The police have nabbed Kanwaljit from his residence and seized his weapon.