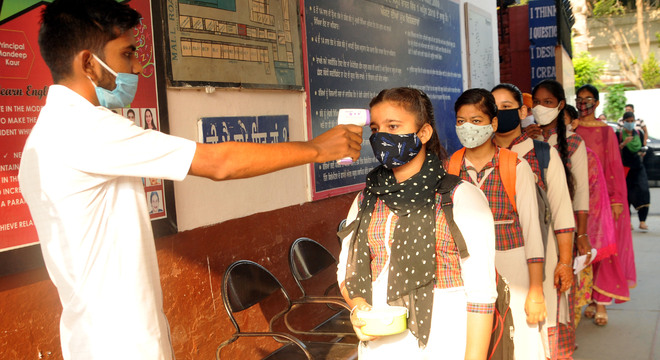 Students’ temperature being checked before entering school in Amritsar on Monday. Vishal Kumar

As per the instructions issued by the state government, Monday morning saw teachers enthusiastically welcoming students of all classes in government schools. Students, too, had a smile on their face, as they met their teachers after a gap of several months.

The primary classes reported lesser number of students turning up in the district as parental consent was still awaited for many students. Classes VIII, IX and X saw good attendance with parents coming to drop their wards to school.

Education Department officials said the heads of government primary, middle, high and senior secondary schools had been asked to adhere to strict safety measures keeping in mind the arrival of students in schools. They said about 35 per cent attendance was reported from primary schools on the first day, while the number of students in the upper primary schools (i.e Class V onwards) was more than 50 per cent.

Harbhagwant Singh, Deputy District Education Officer, said all school heads and teachers had already informed students and parents of students about the reopening of the school for all classes.

“Books and reading aids have already been made available to students. Uniforms have also been provided to students as per the government instruction,” said Harbhagwant Singh. He said students coming to school would have no problem in starting the month of August in classrooms, as the curriculum for the months of April, May and July has already been conducted online and students were in constant touch with their studies. He said as for kindergarten classes, schoolteachers have been asked to visit parents to get their consent.

Meanwhile, private schools refrained from resuming offline classes for pre-primary, primary classes, as they were yet to get parental consent. As for upper primary classes, schools have distributed consent forms and will only take a call in a day or two.

Government elementary schools in Tarn Taran reported high attendance as schools reopened for all classes on Monday. Paramjit Singh, Deputy DEO (Elementary), said he visited the government elementary schools of Chutala, Pandori Gola, Malhia and Naushehra Pannuan and on an average, 70 per cent students turned up. “There are 231 students at Government Elementary School, Nanaksar, and 89 came to school,” said Rajwinder Kaur, head teacher at the school. She said the staff had been visiting the school daily and the building was sanitised. Gagandeep Singh, a Class V student, said he was happy to go to school, as he missed extracurricular activities and his teachers. He said they enjoy having midday-meals and would be able to meet his friends as well. The staff of Government Elementary School, Chutala, had decorated the gate and the school to welcome students. Paramjit Singh, Deputy DEO, distributed sanitisers, note books and pencils among students. Sukhmander Singh, Principal of Government Senior Secondary School, Rataul, said the attendance was good as students of junior classes joined from Monday. The Principal said the attendance improved after more students attended the school on Monday.

With 50% attendance, turnout expected to get better in Gurdaspur

As schools reopened for all classes, 50 per cent attendance was reported across schools in this border district. DEO (Secondary) Madan Lal Sharma attributed several reasons for the restrained turnout. “Things are bound to improve by the end of the week. We have no reasons to worry. Normally, it has been seen that whenever schools open after long lay-offs like after the summer holidays, the percentage of students coming to schools is not very high. But then things start improving after a few days,” he said. Officials claim efforts were being made to contact parents and get their consent to send their wards to schools. Sukhbir Kaur, a teacher at Government Primary School, Hardobathwala, said she and her colleagues remained busy throughout the day trying to inform parents that sending children to schools was perfectly safe. “I met scores of parents who were wary of sending kids to school because of the pandemic. Actually, it is not the fault of these parents. The fact is that there are so many rumours floating around about the third Covid wave, that it is making parents a bit apprehensive. We are trying hard to dispel this absurd notion,” she said. Sukhbir said many parents were also averse to giving their consent. “We assured them that their children will be absolutely safe. It was only then that many of them relented,” she said. Sources claimed that another drawback was that the Education Department had given an option to children that if they were unable to attend, they could attend online classes. “This is also a big factor in keeping students away from their classrooms. Kids have now adjusted themselves to getting taught through the online system and now, they feel comfortable studying from home rather than attending their classes in schools. This needs to be tackled carefully. We have told parents that the online teaching system was a stop-gap arrangement and classrooms were the best places to study,” an official said. 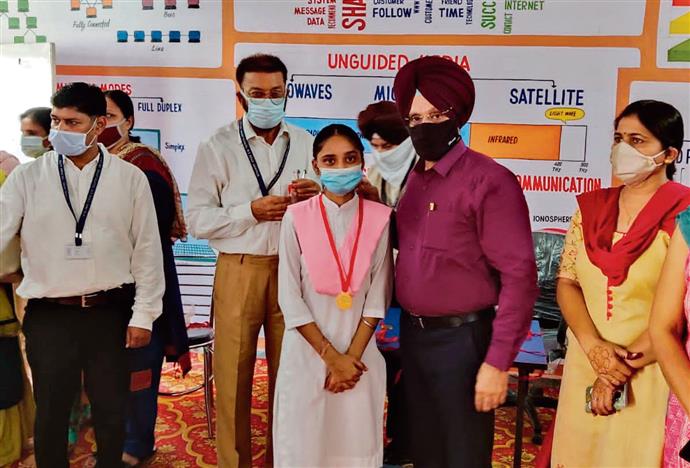 Satinder Bir Singh, District Education Officer, Secondary, Amritsar, honoured students, who bagged top positions in the district in the PSEB Class XII, on Monday. Several students who scored above 90 per cent marks were awarded medals and insignia. All students were from Meritorious School. Among them were Meenakshi, who secured the first position in the district with 98 per cent marks.