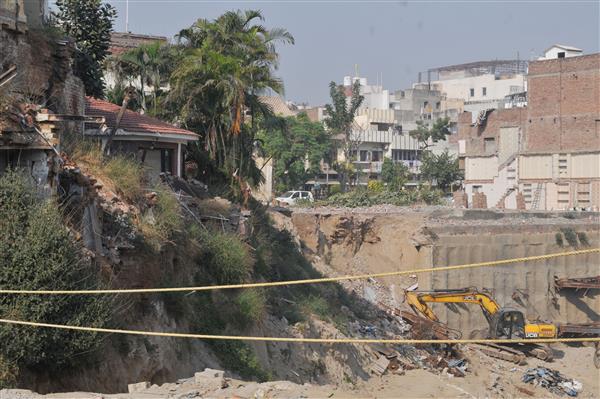 An under-construction hotel sealed by the MC in Amritsar on Friday. Photo: Vishal Kumar

The Municipal Corporation (MC) cracked the whip on illegal under-construction buildings in the city. Two hotels have been sealed for being constructed without getting an approval of the building plan from the MC.

The Municipal Town Planner (MTP) wing of the MC sealed two under-construction hotels under a campaign launched against illegal constructions in the city.

The campaign will continue in the coming days, the Commissioner has given strict orders regarding illegal constructions. —Pradeep Sehgal, MC’s central zone assistant town planner (atp)

Similarly, the team sealed and stopped the work of an illegally constructed hotel in Chhajju Mishra Gali in the inner city. ATP Sehgal stated that as per the orders of MC Commissioner Kumar Saurabh Raj and guidelines issued by MTP Meharban Singh, they would not tolerate any illegal construction.

ATP Sehgal said the campaign would continue in the coming days, the Commissioner has given strict orders regarding illegal constructions.

The MC and its team are working to end the financial loss caused to the MC due to illegal constructions in the city.

Meanwhile, another team of the MC led by ATP Vazir Raj demolished an illegal colony in Kaptangarh. The MC demolished the boundary wall, sewer and water supply lines with a ditch machine. Colonisers and some politically influential people entered in a verbal duel with the MC officials. MC officials claimed that the drive would continue in the coming days.