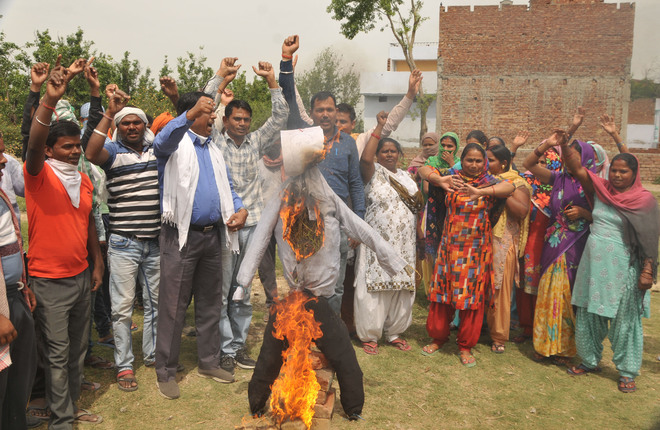 Irate migrant labourers on Sunday held a protest against the Central Government for labelling them as bonded labourers hooked to drugs on the outskirts of the city.

Raising slogans, they burnt an effigy of Union Home Minister Amit Shah and called upon the government not to issue mindless statements creating division in society. They reiterated their pledge in favour of farmers.

Rani, a migrant from near Lucknow, said her family had been residing here for the past two decades. She said no member of her family was hooked to drugs. Another protester, Sangeeta of Bihar, said the government failed to generate enough employment.

A migrant leader, Mahesh Verma said: “We condemn the Union Government’s statement that farmers of the state got their agriculture-related work done from migrants in exchange for drugs. So far, no such incident has come to the fore. We come here for a livelihood so that we can rear our families and children back home.”

“Clearly, there is a face-off between the Centre and farmers over the three agriculture laws. The government should not try to weaken the relations of farmers and labourers,” said the migrant leader.