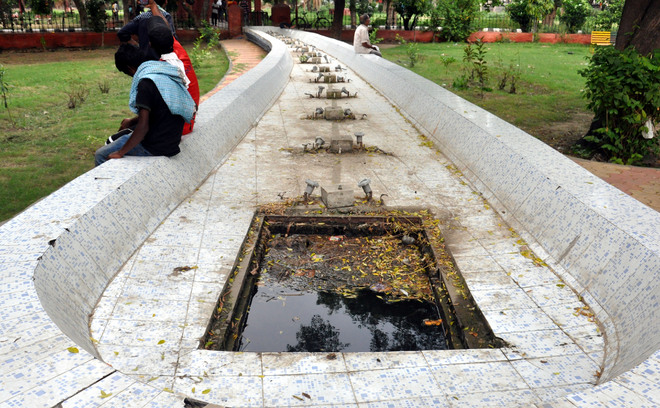 dirty look: Several parks in city, including the Goal Bagh, lie in a state of neglect as the monsoon has given free pass to weeds and stagnant water in Amritsar. Photo: Sunil Kumar

The attempt to create green spaces in the city by developing and restoring several old parks has again failed to bear fruit as the lockdown led to the suspension of maintenance works for an indefinite period.

Most of these public parks now paint a picture of neglect as one can see growth of wild plants and weeds, puddles of standing water, dysfunctional fountains and lights and broken toilets in these parks. While the MC and the Amritsar Improvement Trust have been carrying out development works at a slow pace, the public parks are yet to get the attention of the authorities concerned.

"Most of the historic parks, including Company Bagh, Shakatri Park and Rose Garden, have been under restoration for the past two to three years under the Smart City and HRIDAY schemes. While these parks did get a makeover, but their condition post lockdown really cries for attention as these parks get a lot of evening and morning walkers now," said Ravinder Khanna, a resident of Joshi colony, who visits Company Bagh daily.

Varun Sharma, a botany student, said, "The Company Bagh has earmarked a small space for herbal plants and plants with medicinal properties and these plants too lie untended. "A small herbal garden was also set up at Gol Bagh, where there is no sign of cleanliness. People want to visit the garden but are unable to do so as it poses a health risk with the monsoon already set in. Besides, it can become a breeding-ground for mosquitoes."

On the other hand, the condition of a number of small parks being maintained by different resident welfare associations is better than public parks or those which are looked after by the civic body. "No doubt, the public parks cover a huge area with multiple structures to be maintained inside the premises. Though they require a lot of time and effort, the civic body has the resources to maintain them," said Varun.

Many gardens overgrown with wild plants

Most of these public parks now paint a picture of neglect as one can see a wild growth of wild plants and weeds, puddles of standing water, dysfunctional fountains and lights and broken toilets in these parks.