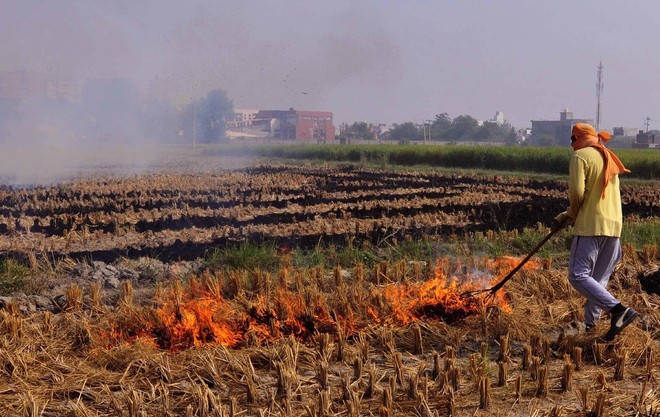 Though National Aeronautics and Space Administration (NASA) showing red spots in Amritsar depicting stubble burning thereby ringing the alarm bells in the government, the agriculture department authorities claimed that the number of such incidents was not big.

“This is start of the harvesting season, but the number is not high. I have asked the nodal officers to check the places where these farm fires were informed and submit a report by tomorrow,” said Bal.

However, images from NASA (National Aeronautics and Space Administration) have revealed that the farm fires were started in Punjab and Haryana and that Amritsar had reported over 50 farm fires in September.

An agriculture department official said, “Amritsar is among the first region where farms fires are reported during this period every year”. He said the administration should take up adequate measures for not only sensitising the farmers about harmful effects of this detrimental practice, but also taking some stringent measures.

However, another official said that at current times when the farming community was agitated against the farm bills passed by the Centre and holding demonstrations, it would not be appropriate to take tough measures such as registering cases against offenders.

Chief Agriculture Officer Bal further pointed out that as per the instructions of National Green Tribunal, the peasants are being sensitised to plough the crops residue in the land itself which would enrich it (agricultural lands) with beneficiary nutrients.

Gurpreet Singh Khaira, Deputy Commissioner, said that the agriculture department had arranged 1,775 machines on subsidy to the farmers, farmer groups and cooperative societies for managing crop residue. He said that the owners of baler machines were called from the Malwa region so that farmers did not face any problem for managing straw. He said it would cost Rs 1,000 per acre for the same.