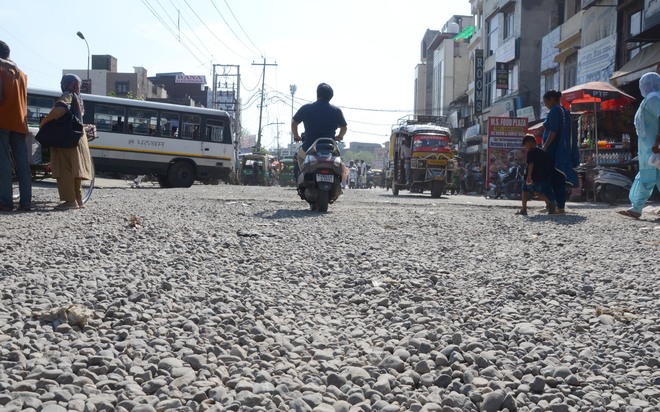 A two-wheeler makes its way through a dilapidated road outside the ISBT in Amritsar. Tribune photo

The approach road to Shaheed Madan Lal Dhingra ISBT and the ones inside it are full of potholes, leaving the passengers harried and bus drivers irked.

Arshpreet Singh, a daily commuter between Amritsar and Tarn Taran, said the very entrance to the ISBT was a painful bumpy ride. So, he preferred to alight outside it. However, the same norm could not be applied while moving out of the city. “Many times, a bus is filled to its capacity while exiting the ISBT. So, I have to board the bus inside the ISBT and cannot escape the wobbly travel.”

Baljit Singh, a bus driver, said, “The moment the bus reaches near the ISBT, it starts swaying. It gives me an impression that I am sailing a ship, instead of driving a bus.” One does not find such deplorable roads even in remote parts of the district, he said.

Raman, whose family has been operating a shop outside the bus stand for decades, said accumulation of rainwater was the main reason for early erosion of the road’s surface, besides continuous plying of heavy vehicles. The administration must put in efforts to efficiently discharge rainwater to secure the roads, he added.

Over 1,000 buses drop in and move out of the ISBT daily. This puts tremendous pressure on the infrastructure. Most of these roads were laid in May this year. The contractor concerned sought closure of the ISBT for three days to lay the road. Unfortunately, the construction coincided with continuous rainfall. Consequently, the three-day closure was extended to over a week.