With the situation getting severe as days pass, residents urge civic bodies to move into top gear 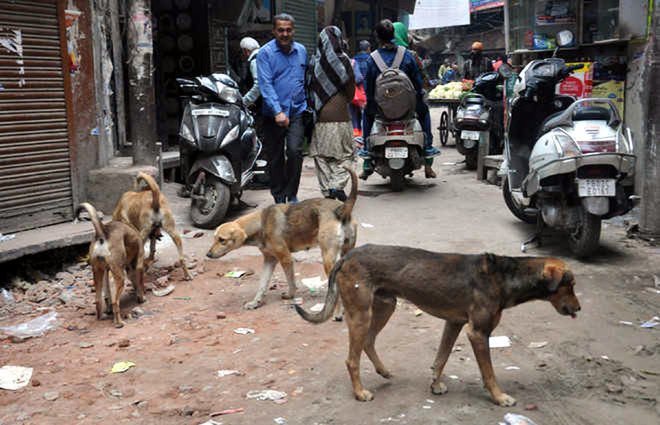 canine trouble: The MC should ensure that stray dogs are transported to a safe and isolated location so that there is no scope of the man-animal conflict. Tribune file

What steps should be taken by authorities to check the rising population of stray dogs?

NGOs can play a big role in sterilisation

The stray dogs menace has been growing out of proportions in almost all the rural as well as urban areas across the nation. Many people blame the provisions of the ‘Prevention of Cruelty to Animals Act’ as the main reason. Such people with a lopsided view ought to have compassion for the stray dogs. They ought to think of many compassionate and pragmatic ways and means of checking the menace. Each state government must devise a strategy and a plan to address this menace. The budgetary allocation of funds to implement the plans must be made. The Centre, too, must assist the state governments in ensuring the successful and progressive eradication of the menace. The dedicated and persistent sterilisation and immunisation of stray dogs is the main action which needs an effective implementation. The NGOs may be roped in such drives. The dog lovers ought to be motivated through awareness campaigns to adopt the local breeds/stray pups. The local breed dogs are known for their survival instincts. The stray dogs must be fed as a compassionate gesture. Dogs are minor angels. They love unconditionally, forgive immediately and they are the truest of friends. Lastly, ‘Every dog must have his day’, as has been said by Jonathan Swift.

Spaying and neutering are a killer duo

Since 1919 livestock census had started in our country but we took no concrete steps based on the said census done after every five years. This does give figures of stray animals increasing with every census but the government never bothers to extend a sympathetic ear to ever-increasing problem. Stray animals do attract our attention when a serious road accident happens due to it or an incident like a stray dog mauled a 2-year-old to death in Amritsar is reported in papers (The Tribune 31.5.20). In our city, freely roaming dogs, cows and pigs are a common sight. But now even media is not reporting it. Under the heading stray cattle menace getting acute day by day (as reported by The Tribune on 28.11.2009) that once Bill Gates during one of his visits to Delhi counted over 15 stray cattle on the road while on his way to hotel from airport. Luckily it was Delhi, had it been Amritsar he would have forgotten the counting. Best measure to control the menace of stray dogs is sterilisation but our local Municipal Corporation has adopted this programme many times in the past and has miserably failed. This programme should be undertaken by central government under their Smart City projects and our city falls under this category. This programme should be named as ABC i.e. ‘Animal Birth Control programme’. To control breeding, spaying and neutering are the best way to control their population. In this process, female animals are spayed by removing their uterus and male animals are neutered by removing their testicles. In the past Bombay High Court had suggested that every society should adopt stray dogs and care for them. Human beings are called social animals but we should realise that animals, being pet or stray, also needs to socialise. In Bucharest, the stray dogs without any training do cross the roads at zebra lines as they probably observed that at such crossings main vehicular traffic stops. Some NGOs should come forward and start training centres for stray dogs as they are sincere, faithful and intelligent, as part of SPG teams they are doing a marvellous job. Sniffer dog squads are too helpful in many ways.

Creating awareness among masses must

Millions of stray dogs live on the streets of India. Despite several measures, there is rapid increase in their population. A concerted effort is a necessity in this precarious situation. Awareness plays an essential role. Joining campaigns, NGOs, community centres can lead to a great extent of contribution. The citizens have great importance in helping NGOs to conduct vaccination in localities. The Resident Welfare Association, too, can donate. The residents need to ensure that stray dogs are sent to local animal shelters or community dog centres. The CCTV cameras need to be installed in societies for monitoring existing strays. Collecting donations for local animal hospitals and shelter for strays can bring a relief for everyone. Moreover, animal shelter employees need to be specially trained to deal with stray dogs. And most importantly, educating locals about existing animal laws is need of the hour. People violating pets and leaving them outside as stray must be punished and put behind bars. The government must take steps towards the roaming stray dogs.

to a safe place

The MC should ensure that stray dogs are transported to a safe and isolated location so that the man-animal conflict can be removed and they can be monitored appropriately. Even NGOs can be roped in if there is a shortage of manpower. A helpline number must be issued where residents can inform the whereabouts of stray dogs so that appropriate action can be taken by the department.

Many ways to look at the answer

There has been a massive increase in the number of stray dogs in the recent times. Several dogs can be seen on the roads and in the streets posing a threat and even risking accidents as they hinder the traffic. Problem of stray dogs is now out of control. In some areas one cannot count the number as the population is increasing rapidly. We must take various steps to curb the menace. First, municipal corporations should catch and take them to some place away from the city. Second, civic bodies with the help of some other welfare societies must sterilise stray dogs so that there may be a control in their birth rate. Third, some birth controlling pills or medicines can be given. Fourth, residents must keep some medicines in their localities which may help keep these stray dogs away. We all must cooperate with local bodies to curb this menace so that children may play freely of fear. Fifth, to elicit a good response the registration should be compulsory, free of cost and done at the doorsteps of the residents. Sixth, we must stop feeding these dogs so that they can end up in the cages of the MC. Some irresponsible citizens knowingly feed these stray dogs so as to guard their houses. This is also a wrong practice. It must be stopped immediately. All these measures will surely help in curbing the nuisance in the city.

Catch and release is a very effective means of reducing stray dog population. It does take money and time. Large populations are public health concerns. It is important to reduce the stray animal population to control the spread of dangerous diseases and stop dog bites and attacks. It is also the cause of a lot of painful deaths for animals as well as humans. If stray dogs are not killed, their population will keep on increasing causing more danger to humans, especially to children. Stray dogs are often carriers of diseases because of the lack of care. It is time for individuals to accept personal responsibility in stray dog management. Gradually, it came to our notice that people feed the street dogs which led to more bites as well as the chance of a disease spreading increases. So, only by killing, the menace can be handled.

It is administration’s duty to look into it

Everybody is well-acquainted with the fact that the rising population of stray dogs has encroached upon our lives. That is why everybody is grappling with this issue. Stray dogs fear has been increasing day by day because they roam in groups and often bite people who are out on excursions. The administration must take stringent actions against this hurdle. They should assign duty to dog catchers to net the stray dogs in and take them to the forest. This is the only way to get rid of it. However, the truth is that the administration does not pay

heed to this massive affliction.

No other animal except dog is so sincere and faithful to man. Dogs have been in service of man since time immemorial and are called his best friends. But the moot question that arises is whose best friends are the stray dogs? In fact they have become a perennial nuisance in the city. The nuisance becomes all the more embarrassing when they roam about majestically in a pack of 10-12 during their mating season and pounce upon unwary passers-by without any provocation. A large number of injuries and deaths resulting from dog bites have been attributed to stray dogs whose threat element invariably looms large. Their innate hunting instincts are considered highly dangerous to human beings. Universally culling is a one-stop solution but people like Maneka Gandhi staunchly oppose it; dubbing it as barbaric. Since killing of stray dogs is punishable under the Prevention of Cruelty to Animals Act 1960, they should be exported to China where dog meat is allegedly consumed in large numbers. Even the Supreme Court is said to have opined that stray dogs cannot be entirely killed but permitted culling using proper methods. However, the menace posed by the stray dogs ought to be addressed by proper policy measures, including sterilisation drives rather than killing them en masse. The PETA people and those dog lovers should adopt the stray dogs. Voluntary organisations should work strenuously to help ameliorate the condition of the poor animals. They should be caught and put into government or contractors’ enclosures can be made for this very purpose. Besides pet control laws should be enforced stringently. In addition, stray dogs should be neutered to check the growth of their population and be vaccinated to minimise rabies-related deaths. Above all it is the responsibility of the MC to devise ways and means to enable city residents to heave a sigh of relief. It should find a ‘Pied Piper’ who can take away the stray dogs across the river Ravi. Also WHO’s guidelines pertaining to stray dogs should be followed and implemented in letter and spirit to effectively tackle the menace of stray dogs.

Covid vaccine drive kicks off on January 16. What are your apprehensions regarding the vaccination programme?

Suggestions in not more than 200 words can be sent to amritsardesk@tribunemail.com by Thursday (January 14).