No check on illegal sand mining at Modhe village 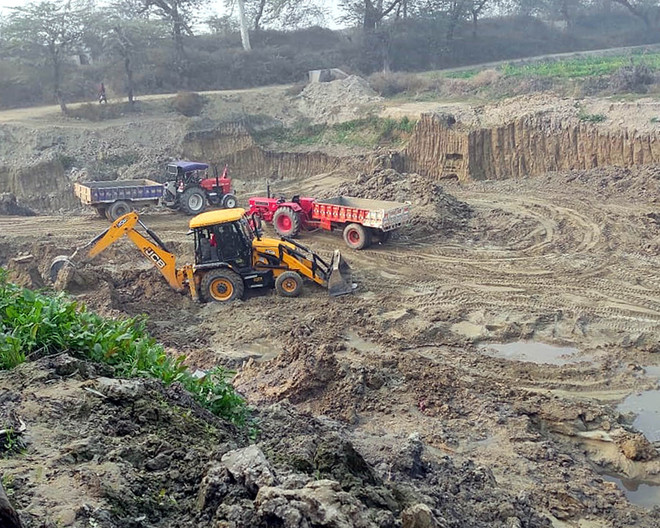 Sand mining goes on unabated at a pond at Modhe village near the internattional border.

Residents of Modhe village near the international border have been worried due to illegal sand mining from a village pond. Irate residents alleged that JCB machines had been extracting sand from the pond for the last one month. They said illegal mining is done in the evening and then loaded in tractor-trailers.

The residents said initially when the digging started, sarpanch had told them that the pond would be dug up to seven feet. “Now, sand has been extracted up to 25 ft from the pond. Who will be held accountable if a child or cattle falls into the pond?” asked Sarabjit Singh, a resident.

Local said they had filed two complaints with the Panchayat Department so far. The last complaint was filed five days ago. “No action has been taken by the department concerned to date. Residents of nearby houses fear that the deep pit will cause damage to foundations of their houses,” said locals. “The total area of the pond is approximately six kanals. Out of it, around three-and-a-half kanals had been dug up with JCB machines. The entire work is illegal and sand is being sold in the market,” said another resident, Kashmira Singh.

The residents demanded that the work should be stopped immediately and the administration must probe whether the sarpanch had taken any permission from the Panchayat Department.

Another resident, Baljit Singh, said, “We have tried everything we could do to stop illegal mining. We cannot fight with sand mafia as these people are very strong. Senior officials should take stern action against those involved in this illegal act.”

DDPO Gurpreet Singh Gill said, “The department has already stopped the work.” He said the BDPO concerned has been asked to file a detailed report. However, the residents said the work was still going on.