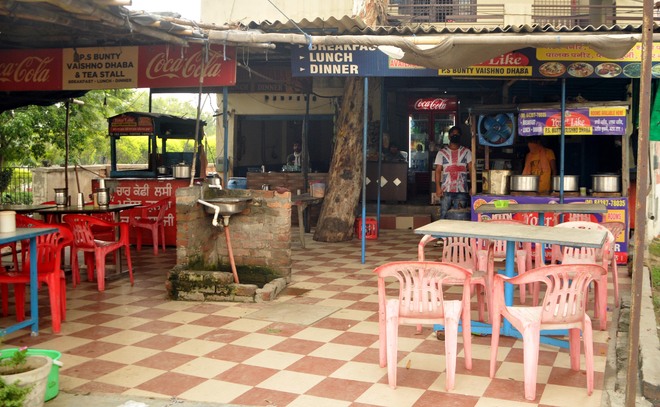 Though most of the businesses have revived during the Covid unlock phase, the highway shops and dhabas are yet to get over the pandemic effect. In the wake of restrictions over interstate movement, the footfall in these dhabas is less than 15 per cent in most of the roadside dhabas. Some of the major highway restaurants in the region have not reopened so far. Even if they have, they wear a deserted look. The dhaba owners even laid off workers due to poor business.

Sukhbir Singh Shambu, owner of Gurdaspurian da Dhaba on the Amritsar-Jalandhar highway, said, “We had three cooks and 12 workers to serve an average of 500 persons every day. After the lockdown, the business has almost evaporated. We are not willing to reopen as there is not much movement on the road. Even load carriers have not properly resumed their work.”

“I reopened the dhaba a few weeks back. It was the only way to run the households of cooks and workers. Now, I have only one cook and three workers. Hardly 50 persons visit us for food. Most of them are truck drivers. The earnings are not even sufficient for the salaries of the workers,” added Shambu.

Most of the dhaba owners have lost hope of the revival of business this year. Not even small dhabas, even the major branded theme restaurants witnessed low footfall and are not able to resume the function.

Sada Pind, a theme restaurant on the bypass road, could not resume its operation till date. Haveli, one of the major brands of highway dhabas, resumed its only restaurant at Manawala in Amritsar but the theme area and activities are still closed.

Dalvir Singh, production manager, Haveli, said, “We have reopened the only restaurant just with one- third occupancy. But the footfall is only 15 per cent. It will take time to revive. We have more than 225 workers and no one was laid off. The staff is on leave and management is paying them salary with a cut. We are trying to help them in this hour of crisis. The business would only resume with tourists. They are not visiting the Golden Temple. Similarly, the functions at Dera Beas are lying suspended.”

With the suspension of traffic at international border and retreat at Attari, the dhabas and restaurants on the Amritsar-Attari road are still lying shut and most of them have no plan to reopen the services till the cross border movement is resumed.

Aman Jaspal, owner of Sarhad, the food and culture park, said, “Tourists, who visit the Indo-Pak border to see the retreat ceremony, were the main customers at Sarhad. We are planning to reopen the restaurant but customers will not arrive till the tourism gains pace in Amritsar. Our restaurant is closed but we are paying salaries to the workers as it is the time to support them. The administration changes its decisions every week. So it is quite tough to suspend and resume the services again and again.”

The dhaba and restaurant owners are also worried about the changing perception of people about the dining out at restaurants. In case any worker tests positive at any restaurant and it is sealed, it would hit the image of the restaurant.