No FIR against coloniser despite Amritsar MC chief, MTP's call for legal action : The Tribune India

No FIR against coloniser despite Amritsar MC chief, MTP's call for legal action 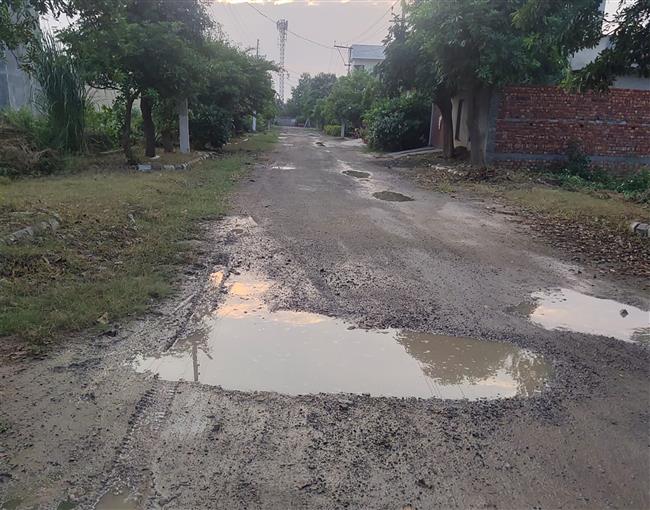 A road in a bad shape in Swiss City Colony of Amritsar. Vishal Kumar

Residents of Swiss City Colony are forced to live in pitiable conditions due to the failure of the coloniser to provide basic amenities to the inhabitants of the colony.

Despite recommendations of the civic authorities, the police failed to register an FIR against the coloniser identified as Sarabjit Singh Gumtala, managing director, Swiss City Developers and Colonisers Pvt Limited. They alleged that the police was not taking any action against him due to his alleged ‘proximity’ with prominent leaders of the current dispensation. Ajit Singh and Omkar Sharma are the other directors of the firm.

Residents said Gumtala was sanctioned the licence from PUDA to develop 9.42 acres of land near Mahal village adjoining bypass between Ajnala Road and Ram Tirath Road, Amritsar, for a residential colony named ‘Swiss City’. The colonisers were supposed to develop the colony as per layout plan submitted by them agreeing to fulfil all conditions of Urban Development Act 1976, Punjab Apartment and Property Act 1995.

They alleged said the colonisers turned a blind eye towards the problems of the city. Gumtala failed to carry out any development works, including laying of water and sewerage lines, street lighting and electricity lines, provision of school and hospital etc. They pointed out that the developer was required to complete the development works and get no-objection-certificate (NOC) from the PSPCL and the PWD before submitting the colony to the Municipal Corporation.

“The residents have spent their hard earned money to purchase the plots and build houses. The market has not been developed, sewers are choked and streetlights are in a bad condition. Since the coloniser has not taken NOC from the authorities as a result it is not possible to legally take the regular electricity connection from the PSPCL,” said a resident.

“As per the licencing letter they were required to complete the development works by March 2009. However, the colonisers got extension and sold out most of the plots. Later, he didn’t give two hoots about carrying out development works. In fact, the firm even did not renew its licence and bank guarantees which lapsed in 2015,” said another resident.

The Municipal Corporation (MC) authorities wrote several letters to the colonisers to renew the licence, bank guarantees and fulfil the promised conditions but Gumtala and his associates did not pay any heed. They alleged Gumtala carved other two unapproved on the agricultural land adjoining Swiss City. They alleged he got another firm in the name of his relatives for developing more colonies after approval from the Amritsar development authority.

Recently, MC Commissioner has ordered registering of an FIR against Gumtala. The MTP, Amritsar, wrote twice (in April and then in July) to the police to register an FIR against the coloniser for violation of Punjab Apartment and Property Regulation Act and Amendment Act 2014.

Despite repeated attempts, Gumtala could not be contacted for his comments.