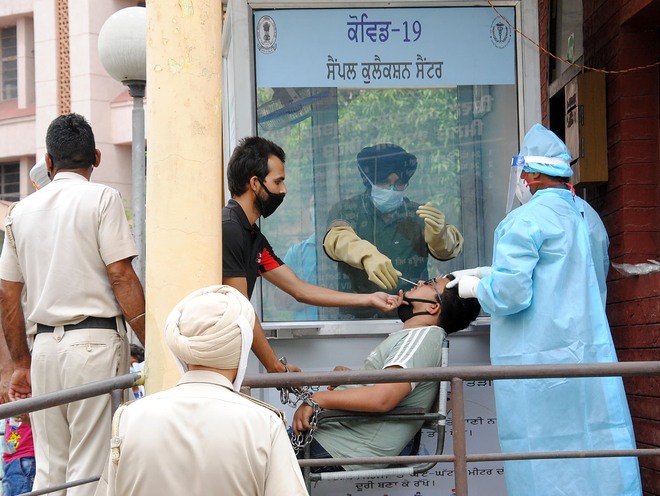 Health Department employees get swab samples of a person in Amritsar on Thursday. Sunil kumar

The district reported 15 new cases on Thursday, taking the total number of cases to 420. The district health authorities said of the new cases, 11 persons complained of influenza-like illness (ILI), two were health care professionals, one was a contact of a positive case and the last one, a local resident, who had returned from Haryana recently.

What is worrisome is the fact that many localities, which had not reported even a single case so far, have started reporting positive cases.

Meanwhile, the district health authorities have also discharged nine patients after complete recovery. So far, the district has witnessed 325 recoveries and seven deaths due to the coronavirus while the number of active cases admitted to hospitals is 88. — TNS

Tarn Taran: As many as 36 persons, who were kept under quarantine at a hostel of Guru Angad Dev College, Khadoor Sahib, 25 km from here, tested negative. They were sent to their homes after providing certificates by the local administration.

Providing information regarding returnees, Bhai Nirmal Singh, a follower of Kar Sewa sect, Khadoor Sahib, which is managing the college administration, said of these 36, 15 were returned from Dubai, nine from Kuwait, while eight and four from the UK and Singapore, respectively. — OC