Not many passengers ready to take the risk 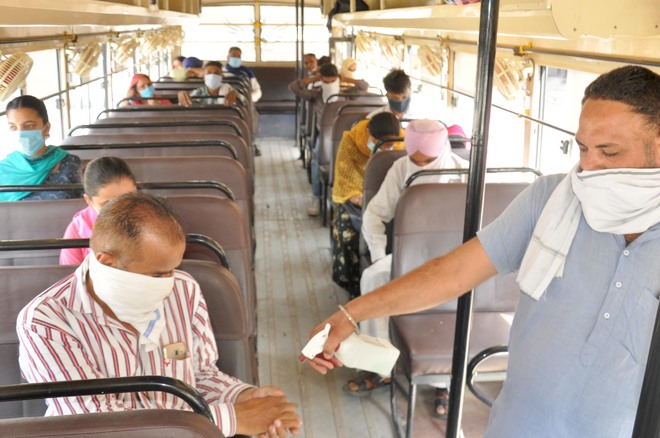 A limited number of passengers travel in a bus in Amritsar on Monday. Photo: Sunil kumar

The government’s decision to allow buses to run at their full capacity received a tepid response on Monday.

A moderate footfall of passengers was found at the Shahid Madan Lal Dhingra Inter-State Bus Terminal. Conductors and drivers were seen waiting for passengers.

Mahinder Singh, a driver of a bus leaving for Fatehgarh Churriyan, said: “Before lockdown, it used to take just 10 minutes to fill the bus to its full capacity. But now, less than 10 passengers occupied the seats even after more than 20 minutes of waiting.”

A conductor said: “People are only moving out of their towns and homes if they have some important work.”

Gurbaaj Singh, driver of a bus heading to Ludhiana, said: “Despite the government allowing us to run buses at full capacity, we managed to get only 30 passengers. In present circumstances, a majority of people are avoiding travelling in buses."

Parminder Kaur, a passenger, said: “I boarded the bus to reach Kathunangal village, which falls on the road from Amritsar to Batala, where my parents live. Since there was some unavoidable work and aged parents had problem travelling, I am going there.”

Earlier, the government had resumed inter-district bus service on select routes after easing of the lockdown on May 20. From June 2, more routes were opened.