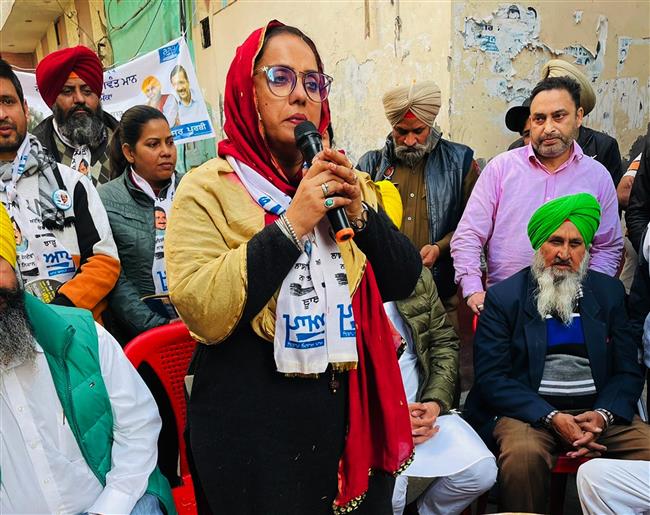 Most people may ask what chance does a first-time poll contestant from AAP holds against political biggies like Navjot Singh Sidhu and Bikram Singh Majithia? According to Jeevan Jyot Kaur, she should not be underestimated.

The district president of Aam Aadmi Party, who is in the fray from high-stake Amritsar East constituency, has been banking on door-to-door campaigning and jan sansad sessions that she holds every day in various wards of her constituency. While her more headline-grabbing opponents are trying to woo voters by running mighty campaigns, Jeevan Jyot says she resonates fully with her party’s ideology and hence was working on ground to make a difference.

“We have 19 wards and we have been relying on door-to-door activities to engage voters with us. We are directly interacting with voters, gathering their opinion on what issues need immediate attention and what do they want from their elected leaders through Jan Sansad sessions,” she says.

Her agenda for poll remains focused on development issues. “For the last 18 years, the Amritsar East constituency has been grappling with issues such as lack of clean drinking water, broken sewerage, dangling high-tension wires mounted right above residential colonies posing an all-time risk. Drug addiction is another major area that we plan to work on,” she shared.

Among the youngest contestants from the city, Jeevan Jyot’s political journey began in 2015 as an AAP volunteer. She was the campaign in-charge of Majitha constituency in the 2017 election and later was appointed the district president. Before taking the political plunge, Jeevan Jyot was known as Padwoman of Punjab, due to her extensive work in the field of women health through her NGO — SHE. Despite no previous experience of contesting an election, Jeevan Jyot is confident of causing a big political upset.

“The two political giants — Sidhu and Majithia — are bearing a personal grudge and not even talking about issues that need attention. Amid all this, I am offering hope for a change. I will not hesitate in saying that Amritsar East is the most neglected constituency in terms of development.”

Her ground campaign is being supported by 10-member volunteer teams assigned in each ward. From organising Jan Sansads in each ward to door-to-door campaign that begins early in the day, these teams are also actively posting live voter feedback on social media platforms. Her appeal to the voters is: “If they trust us, if they trust our work and our development model in Delhi, then give us a chance,” she says.