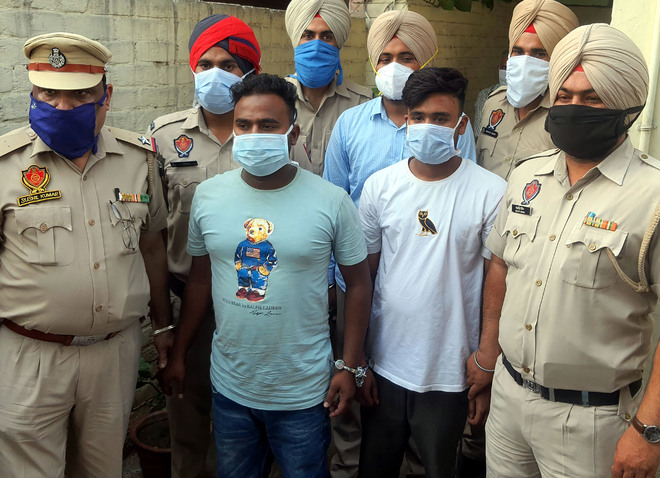 The convicts in the police custody. The officials recovered four pistols along with ammunition from their possession. Vishal Kumar

The police nabbed a notorious criminal along with his accomplice here on Monday. Those arrested were identified as Sahil Kumar, alias Kalu, and Nikhil Gill, both residents of Gwali Mandi area here. The police recovered four pistols along with ammunition from their possession. Kalu had several cases, including one under the NDPS Act, registered against him.

Assistant Commissioner of Police Dev Dutt Sharma said on a tip-off, Kalu and Gill were nabbed from near the Army quarters. He said Kalu had formed a gang and had 13 criminal cases, including attempt to murder, under the NDPS Act, firing and under the Arms Act, registered against him. He had been evading arrest in many cases. They were also involved in robberies also.

He said Kalu was involved in the firing incident in which he had injured a person by firing at him. It was a monetary dispute case that took place in Gate Hakima police station area. The accused was brought on police remand for further interrogation.

Meanwhile, panic gripped Kabir Park area after three occupants of a car indulged in firing on late Sunday evening. Following information, the police party reached the spot and recovered two empty shells. Immediately an alert was sounded and patrolling parties started a search. Later, the car was found abandoned in Rani Ka Bagh area and a .12 bore rifle was also recovered from the car.

Kabir Park police said they got information that three car occupants were firing shots in the air. The car (DL-10-CC-0930) had broken bumpers. The police said they were looking into the details and ownership of the car. CCTV cameras in the area were being analysed for clues.