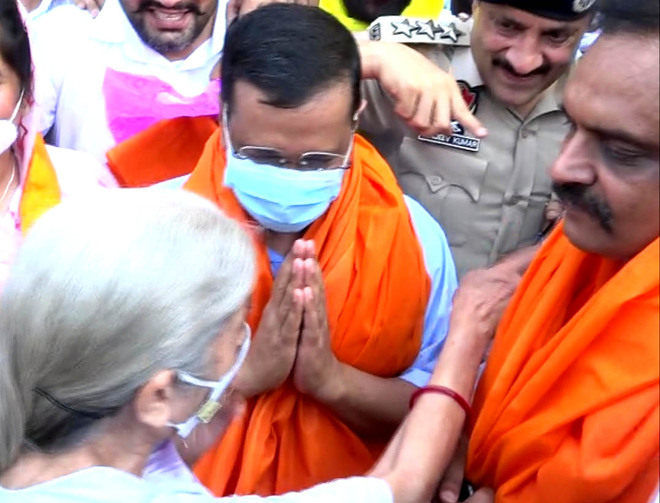 Senior BJP leader and former minister Prof Laxmi Kanta Chawla has dispelled rumours of switching from the saffron party to any other party.

Chawla’s presence in Durgiana Mandir during the visit of AAP national convener Arvind Kejriwal, along with the newly inducted former IG Kunwar Vijay Partap Singh, had triggered a debate.

Kejriwal touched the feet of Chawla out of respect and she also reciprocated and honoured him with a siropa.

When Kunwar was to join AAP, buzz was that more disgruntled leaders from other parties could switch to AAP. But nothing of the sort had happened. Chawla said she was present on the occasion in her capacity as ‘sanrakshak of Durgiana Mandir’, a post in the shrine committee.

“I could never think of changing parties. I was there to honour them. It was Kejriwal’s greatness to shower me honour. He touched my feet and photos were clicked, giving it another dimension without any base. It happened earlier also when I met him just by chance,” she said.

This was for the second time in the past three months when Chawla met Kejriwal.

Chawla, who left no chance in questioning the BJP-led central government’s ill-conceived policy matters in public interest, made it clear that she was away from active politics now and that there was no plan to come in the mainstream politics.

Earlier, meeting between Kejriwal and Chawla had taken place on March 21 at the Circuit House complex. Kejriwal had reached here after attending ‘kisan mahapanchayat’ at Baghapurana to take a flight back to Delhi. Amritsar was his transit route.

The meeting came to light after a picture went viral on social media, showing the two and AAP MLA Prof Baljinder Kaur having a tea.