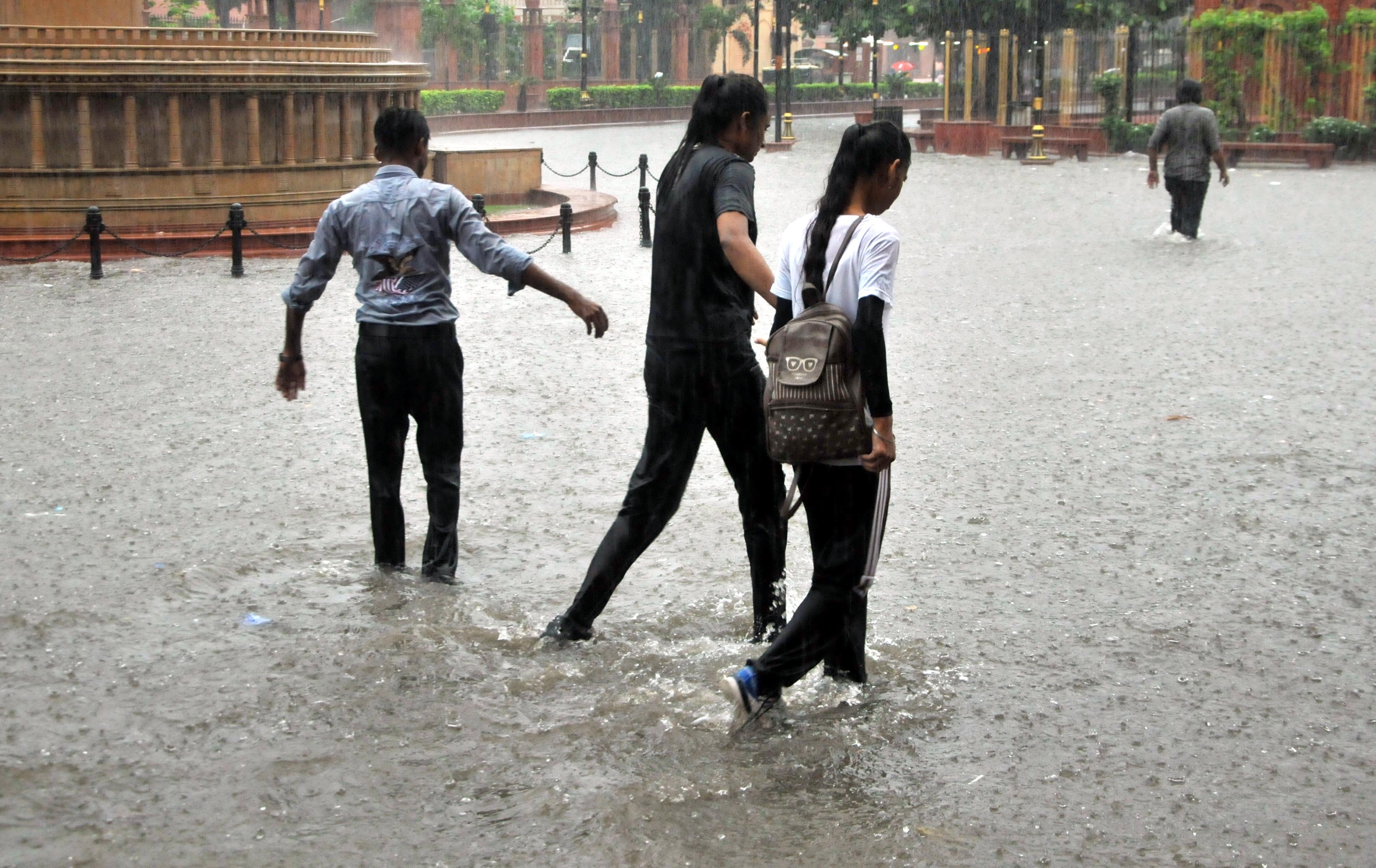 Govt, residents together can make a difference

Waterlogging on city roads is a common problem during monsoon. In rainy season, water gets accumulated on roads and this stagnant water acts as a breeding ground for mosquitoes. Commuters have to wade through flooded streets. A way to confront the waterlogging problem as well as the ever-declining levels of groundwater can be rainwater harvesting. Sale of polythene should be prohibited as polythene chokes drains. The authorities should make arrangement for regular cleaning of drainage pipes. Waterlogging occurs when pipes get clogged due to garbage which flows into it with the rainwater. So, if the pipes are cleaned regularly, they will not get blocked and this problem will be minimised. The administration should ensure that roads are re-carpeted every five years. The government should create a committee which should keep a vigil on this problem and whenever the problem arises, the same must be reported to the department concerned and it may be resolved right away. The onus also lies on us to lend our support to the local government to curb these difficulties. Only condemning officials and relying on them won’t bring any change to the situation. Instead each one of us should contribute on individual levels by taking precautionary measures.

For a short-term solution, the MC must ensure that the roads and streets are in a good condition, filling the pits and ditches beforehand and avoiding any waterlogging in them. Secondly, it should check and ensure that the drain ports aren’t blocked and are functioning properly. Additionally, the MC should leave some unpaved ground along both sides of the roads, allowing maximum water to seep into ground after rains. In the long run, it should take initiatives to install rainwater harvesting system and dig underground water storage tanks in localities so that the water from rooftops of houses that either runs into drains or is simply discharged in streets can be collected in a common tank and can be later used to serve some basic water needs of the area. Furthermore, it should develop and promote more green space in localities as plants and trees hold the rainwater in their roots and allow it to seep into the ground gradually. It will not only reduce waterlogging during rains, but also replenish the groundwater table.

Waterlogging on our city roads is a common problem during monsoon. Stagnant water leads to breeding of flies and mosquitos. The MCA authorities should carry out the required repairs in the drainage system and its maintenance should be undertaken on regular basis. Potholes on roads pose a grave risk to people. Many mishaps can be averted by timely filling potholes, regularly recarpeting roads and replacing the missing or broken covers. For this, inspections teams must be formed by the MCA especially before the onset of monsoon. There should be a proper check on dumping of waste and garbage in the sewerage system. One should also restrict the use of plastic bags as that is the main cause of choking of sewerage system and waterlogged roads. However, the cooperation of the citizens is also required. We need to acknowledge that only joint efforts by city residents and the MCA can save the holy city from waterlogging and other issues.

Sewerage system should be improved

In order to tackle the waterlogging in the city, the MC should take the help of the Chandigarh administration by asking them what steps they take to tackle waterlogging in their city. Besides, sewerage system should be improved in the city so that water doesn’t get accumulated at all during rainy season. Secondly, roads should be cleared of all ditches and potholes. Contract for repair of roads should be given only to those contractors who give undertaking that after repairs no damage will be caused to roads by rains. Unwanted speed breakers should be removed from roads. Last but not the least, roads dug for the gas pipeline work, water pipes should be repaired before monsoon.

Sewer pipes should be cleaned regularly

When all roads and streets are cleaned on daily basis, why underground sewer pipes are not cleaned regularly? If we find answer to this question then waterlogging problem will be solved automatically. The sewer pipes are cleaned only when they get choked and start overflowing. Similarly, why the department concerned of the MC doesn’t perform desilting after fixed interval of time? Our municipal corporation has got high pressure water jet machine to clean the sewer pipelines, but they are not used regularly. The motto of all government departments at local, state or Central level is to spend money for new construction or new machinery, but never pay attention on its upkeep or maintenance. Unless and until this modus operandi is changed, the problem of waterlogging will stay.

Most house owners, be in villages or cities, earmark some time for some special work before the advent of the monsoon. This special work is to doubly check if there is any blockage in the rainwater outlets. The Municipal Corporation should do much more than de-silt all sewers and drains for timely and proper drainage of excess water. A comprehensive sewer system was provided about 25 years ago, but even that proves inadequate during a heavy downpour. People would have to learn to live with the perennial problem of waterlogging during the rains. However, open manholes call for immediate attention. And the lids should be made of concrete material otherwise wooden lids tend to come loose and leave manhole mouths. One can see them floating in rainwater. Arrangements must be made to pump out stagnant water wherever found to prevent the outbreak of diseases like malaria. Waterlogging is not new to Amritsar. Most of the accumulated rainwater gets drained out through the drainage pipes laid underground, but it takes a long time, sometimes days. Everybody eagerly wait for the monsoon to get respite from the blistering heat, but a shower becomes a nuisance when rainwater gets accumulated on roads for days.

Collective effort is the only solution

This is not the first time that negligence on the part of the Municipal Corporation has led to waterlogging in most parts of the city. The city is in a sorry of state affairs as far as rainwater drainage is concerned. To deal with this and relieve people of this awful problem, the MC should step up efforts and take some quick, concrete action. First and foremost, a well-maintained and renovated drainage system must be provided throughout the city so that rainwater can flow out easly through drainage pipes provided along road kerbs or in streets. Moreover, it’s the people’s responsibility not to throw garbage into drains near their houses, which leads to blockage of them and ultimately results in waterlogging. In Canada, individuals are instructed to clean their passages as well as the area around their houses in case of snowfall. If they do not do it, they are fined. This practice should also be adopted by the MC to force people to keep the drains around their homes neat and clean. In addition, roads or streets should be re-carpeted after every five years because most of the times roads get damaged due to stagnant water and heavy traffic which further lead to deep pits with water getting accumulated into them. As a result, several accidents and mishaps have occurred there. Sadly, this alarming issue must be resolved by the civic body. Until every individual puts in little precious contribution, the problem will only aggravate.

Rainwater getting accumulated during the rainy season has become a common site on the city roads. Every year, the administration announces a plan to tackle the problem of waterlogging effectively in the city, but all plans remain on paper. Instead of chasing the dreams of a Smart City project, the authorities should focus on dealing with the waterlogging problem and ensuring that all basic amenities are provided to city people. The government must promote rainwater harvesting system to tackle the twin problems of waterlogging and falling water table. The administration should make sure that good drainage system is in place to deal with the problem. All drains should be cleaned before the arrival of the monsoon. It is also the duty of the residents to keep the drains in and around their houses clean. We should not throw garbage into the drains, which block the drains, ultimately leading to waterlogging during the rains. We need to understand that only joint efforts of the city dwellers and the MC can bring the holy city out of this every-year terrible mess.

Only the MC is not responsible for the waterlogging problem. The citizens should also shoulder the responsibility of keeping civic infrastructure of their world-famed city — roads and drains — clean. The residents should not throw garbage or anything directly into the drainage pipes. The MC would do well to immediately solve the problems plaguing the citizens. It should clean the drains every month so that waste does not get assembled in them. It should make both short and long-term plans to tackle the problem. As a short-term solution, the MC must ensure that all roads and streets are in a good condition without any trace of pits and ditches. Secondly, it should check and ensure that the drain ports are not blocked and are functioning properly. Additionally, the MC should leave some unpaved ground along both sides of the roads allowing maximum water to seep into the ground after rain. It should take the initiative to install rainwater harvesting system in places and dig underground water storage tanks in localities so that water accumulated on the rooftops of houses, which either runs into drains or is discharged on streets, can be collected in a common tank only to be used judiciously later. Furthermore, it should earmark green spaces in localities as plants and trees hold rainwater in their roots and allow it to seep into underground water gradually. It will not only reduce waterlogging during the rains, but also replenish the water table.

Plastic pollution harms health, wildlife and the environment. The Central and state governments on July 1 banned the use of single-use plastic. What are the alternatives to end our dependence on single-use plastic? Also, are the authorities doing enough to implement the ban?

Suggestions in not more than 200 words can be sent to amritsardesk@tribunemail.com by Thursday (July 7)