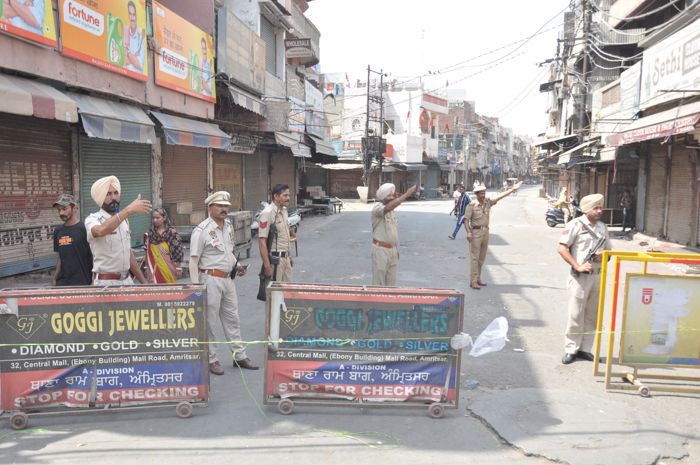 Foolproof security Cops on guard in Rambagh during the bandh call in Amritsar on Monday.

The city police heaved a sigh of relief after the 38th Operation Bluestar anniversary passed off peacefully. The area around the Golden Temple and the walled city turned into a police cantonment to thwart any untoward incident.

The police in civvies were also present at the Golden Temple complex and around the shrine keeping a close eye on the activities that were taking place to mark the occasion.

The Punjab Police have been on toes for the last fortnight as an alert was sounded in view of regular seizure of explosives including IEDs and hand grenades being smuggled by anti-national entities across the International Border.

Around 4,000 cops were deputed in the walled city area, which was heavily barricaded to check the movement of miscreants.

As the city remained shut in view of the Bandh Call given by a radical outfit, the police patrolling parties were continuously making rounds on different roads. The police teams were questioning people coming from outside in the early morning hours.

“We also thank the people for exercising restraint and not indulging in any activities that could create law and order problem,” said Parminder Singh Bhandal, Deputy Commissioner of Police, Law and Order.

Another peace official wishing not to be named said though it was very hectic during the past several days, finally everything went off peacefully.