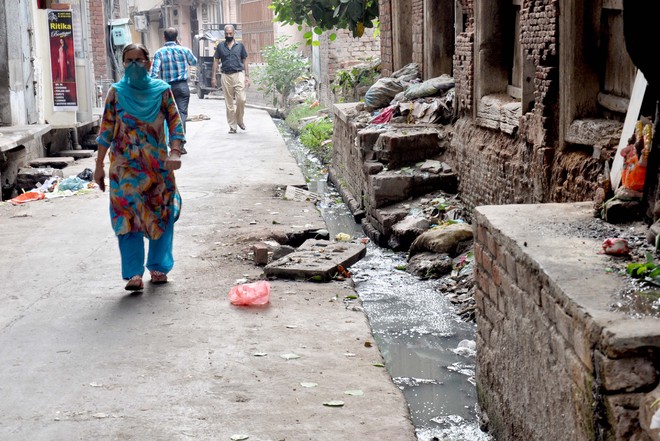 An open drain in the Khooh Suniara area in Amritsar. Photo: Sunil Kumar

The onset of the monsoon might cheer some people, but residents of the walled city area are peeved over the issue of clogged drains in different parts of the city. A large portion of the drains in the old walled city is still uncovered, thereby posing a great health hazard.

Residents complained that during monsoons, when rain lashes the city, the sewage slush spills over to the roads. Manoj Kumar, a shopkeeper in the Sirki Banda bazaar pointed out that though they have asked the municipal authorities to cover the drains, but hardly anything was done till now. This is not that open drains are everywhere in the walled city, drains were covered in many parts of the city.

Dheeraj Kumar, a resident of Khooh Suniara pointed out that during rains, the filthy water spills over to the streets, thus emanating foul smell. "The municipal corporation authorities should do something about it. During times when Covid-19 pandemic has been spreading its tentacles in the walled city area, accumulation of this slush can further aggravate the problems," he said.

Many times, the unchecked solid waste along with plastic bags enters into covered drains, thereby obstructing the flow of sewage, resulting in waterlogging on the main roads for hours during drains.

Mayor Karamjit Singh Rintu said the problem existed where the streets were very narrow. However, he added that under the Smart City project, there were plans to correct the sewerage and water supply system in the walled city.